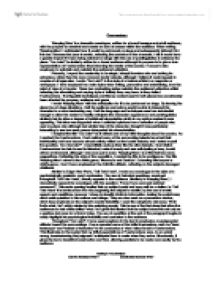 Commentary 'Keeping Mum' is a dramatic monologue, written for a broad teenage and adult audience, with the purpose to entertain and create an aura of unease within the audience. When writing 'Keeping Mum' I anticipated how it would be performed on stage and subsequently tailored it for this use. Because the pace is erratic, reflecting the confusion in the character, I felt it would have a greater impact if it were being watched on stage with the use of paralinguistics to enhance the piece. 'Too Late?' is similarly written for a broad audience although its purpose is to give a true representation of Fuerteventura thus informing the reader of the country. Humour is also employed, to entertain and maintain the audience's attention. Primarily, I expect the readership to be single, intrepid travelers who are looking for adventure, rather than the more common tourist retreats, although I believe it would appeal to couples of all ages also. I wrote 'Too Late?' in the style of a feature article in a magazine or newspaper. I have employed two main styles when writing; persuasive and entertaining, from the point of view of a traveler. These two contrasting styles maintain the audience's attention whilst reflecting the stimulating and varying style of holiday they may have, is they visited Fuerteventura. ...read more.

Edgar Alan Poe's use of repetition, exclamations and statements that are directed toward the audience, clearly displays the subjects' madness. Toward the end, I used these techniques to display my subjects increased confusion, urgency and psychological instability, "She wouldn't stop speaking at me. What was I supposed to do? She wouldn't stop speaking at me. At my face. And then my hand was over her mouth". In contrast to the monologue, the purpose of the travel writing piece is to inform and as well as entertain. I used historical allusion to add substance and fact, making the piece more believable and authentic, "Miguel de Unamuno, a Spanish poet and philosopher exiled on the island in 1924, called it 'an oasis in the middle of civilization's desert, a rock thirsting in the sun". I also used religious allusion, "Mecca of surfing", for similar reasons. To create a sense of Fuerteventura's true culture, I incorporated an amusing description of Agnana, "wearing a flowery brown oversized dress and a pink beaded necklace". This plays on the connotations of the past, and rustic and unfashionable living, reflecting the idea that in the mountains, away from the tourist-stricken towns, they are lost in the past. ...read more.

The use of exaggeration also heavily reflects the work of Bill Bryson, where, in "The Lost Continent", Bryson is describing Des Moines, "There's a New Jersey couple up the street from my parents' house whom you see wandering around from time to time looking faintly puzzled but strangely serene." In conclusion, I feel the influences of Bryson's exaggeration and gentle humour and Theroux's sarcasm and hyperbole have inspired me to comically give an accurate, yet interesting account of Fuerteventura. Poe's influences in 'Keeping Mum' inspired me to write about an interesting subject matter; a madman. His innocence was initially difficult to bring across, but through the use of repetition, displaying his confusion, I felt I did this quite well. The two pieces have many similarities; however one of the major contrasts is the denouements. In 'Too Late?', the audience is left with no questions unanswered and an honest conclusion but in 'Keeping Mum', the audience is left with no idea how it ends. The title 'Keeping Mum' plays on the idea of the childs game; 'Mummy's and Daddy's' and questions arise as to the whereabouts of Kym and whether she is alive or not; these questions chillingly remain unanswered. ?? ?? ?? ?? Kathryn Trochimiuk Centre Number 61677 Candidate Number 8127 ...read more.