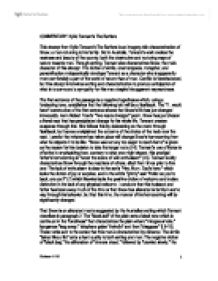 COMMENTARY: Kylie Tennant's The Battlers This excerpt from Kylie Tennant's The Battlers is an imagery-rich characterization of Snow, a man returning to his family. Set in Australia, Tennant's work evokes the vastness and beauty of the country, both the destructive and nurturing ways of nature towards man. Through setting, Tennant also characterizes Snow, the main character of this excerpt. The diction of simile, onomatopoeia, metaphor, and personification melopoetically develops Tennant as a character who is apparently more comfortably a part of the world of nature than of man. Conflict is foreshadowed, but this excerpt intertwines setting and characterization to produce anticipation of what is to come and a sympathy for this man despite his apparent waywardness. The first sentence of the passage is a negative hypotheses which, using a foreboding tone, establishes that the following text will be a flashback. The "If...would have" construction of the first sentence shows that Snow's life has just changed irrevocably. As in Robert Frost's "Two roads diverged" poem, Snow has just chosen a literal road that has precipitated change for his whole life. Tennant creates suspense through this. She follows this by elaborating on the event through flashback, but leaves unexplained the outcome of the choice of the track over the road. I predict that whatever has taken place will change Snow's homecoming from what he expects it to be like. ...read more.

Paragraph 4 provides a structural break in all this build-up of harshness. The tone changes to a more sympathetic one. The fatigue of the journey sets in with even Tom and Bluey "tired," "panting and dusty" (23). This paragraph serves as a break, but also provides insight into Snow's character as Tennant says he is one "who meditates an onslaught on someone else's sheep"(24). The physical description of Snow as "a big man, six foot one" (25) explains the ease with which Snow can operate as a sheep hustler. Rather than considering the ethics of a matter, Snow is characterized as one who considers ease as a reason for action. "To his mind, there had always been something contemptible about buying mutton when it was walking about in the paddocks all around him" (26-7). The paragraph ends with yet another statement confirming this as a turning point in Snow's life. "All his life, with that decision, veered into a different course" (29) echoes line 2. Here the verb "veered" highlights the suddenness and severity of this turn. I expect that the change will be positive, despite the danger inherent in the act of sheep stealing that Snow is contemplating, because his life has been depicted with such negative diction up to this point. Surely any change would have to contrast to the despair of the tone so far. ...read more.

The beauty of: breathless, tranquil silence as the world turned over on its side for the night, with the sky a translucent bubble of pale green glass so fragile you would think that at the tap of a fingernail, it would ring, and shiver the first stars down in trails of fire like water-drops on a window pane" (47-50 ) is breathtaking. The sea imagery continues with the "pale green glass." Personifying the world at rest for the night brings close the vastness of the setting of the earlier part. The fragility of sky and the beauty of a rain of stars in this section of the passage creates an awe-filled mood. Snow seems at home here and at peace. The passage concludes with this peace. Even though it is cold, the "frosting of stars" lends even the cold a majesty. Snow waits. The suspenseful tone returns only after Snow moves to return to civilization to steal his sheep. From the "barbed wire," the ominous atmosphere returns. The last scene is that of a "darkly blotted" paddock and I feel that Snow is in for trouble. Tennant's characterization here skillfully blends disparate types of imagery to create the effect of complexity in a man. The diction is neither purely positive nor purely negative. Instead, the combination of savage, beautiful, lonely, bleak and colorful imagery serves to create both setting and character, and builds anticipation of what is to come. 1 Carlson H-16 ...read more.