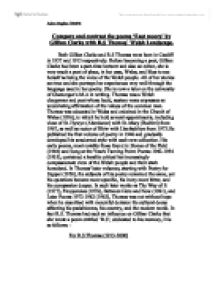 Compare and contrast the poems 'East moors' by Gillian Clarke with R.S Thomas` Welsh Landscape. Both Gillian Clarke and R.S Thomas were born in Cardiff in 1937 and 1913 respectively. Before becoming a poet, Gillian Clarke had been a part-time lecturer and also an editor, she is very much a poet of place, in her case, Wales, and likes to see herself as being the voice of the Welsh people. All of her stories are true and she portrays her experiences very well through the language used in her poetry. She is now a tutor on the university of Glamorgan's M.A in writing. Thomas was a Welsh clergyman and poet whose lucid, austere verse expresses an undeviating affirmation of the values of the common man. Thomas was educated in Wales and ordained in the Church of Wales (1936), in which he held several appointments, including vicar of St. Hywyn (Aberdaron) with St. Mary (Bodferi) from 1967, as well as rector of Rhiw with Llanfaelrhys from 1973.He published his first volume of poetry in 1946 and gradually developed his unadorned style with each new collection. ...read more.

The impression that I get of East Moors is that it is a dark miserable place where if you are not local you are not welcome; it strikes me as a typical Welsh steelworks village, which only the close knit local community can understand. Being a country parson for many years meant that R.S Thomas was more than accustomed to the countryside, and it is the countryside which was the chosen setting for 'Welsh Landscape'. R.S. Thomas was very much influenced by the romantics Wordsworth and Coleridge, who themselves, concentrated more on the country than the town and who wished to convey their own emotions. Thomas was a typical example of a poet who stubbornly ignored critics and voiced his own controversial opinions that modern poetry must be urban. Words and phrases such as 'wild sky', 'rivers', 'tractor', 'hum of machine', 'strung woods', 'owls', and 'fields corners', all suggest that R.S Thomas` poem is set in the countryside. Both poets use nature in their poem to help emphasise the mood. Clarke uses it by saying '...an icy rain is blowing through this town.' ...read more.

East Moors is structured with a touch of ballad, it has formal verses and firm endings to the stanzas. Gillian Clarke said she wanted a poem with stanzas of the same length because she felt that it is a kind of song. She has very much achieved this with her poem, because, not only is it like a song, it has strong, authoritative endings to each stanza. The structure of both poems adds to their impact and makes them even more effective. It's been enjoyable reading both poems and learning about the backgrounds of both poets Gillian Clarke and R.S Thomas. My personal favourite poem was R.S Thomas' Welsh Landscape because I agree with it entirely, I believe that Wales is indeed a great nation in danger of losing everything that it has going for it, if they don't do something about it fast, and Thomas sums this up well in the last line when he says that the Welsh people are 'worrying the carcase of an old song'. This illustrates that they are still hanging on to their reputation of being the land of song, and it seems almost unsettling to him. That's why I personally preferred R.S Thomas' Welsh Landscape over Gillian Clarke's' East Moors. Adam Hughes 10MPB ...read more.