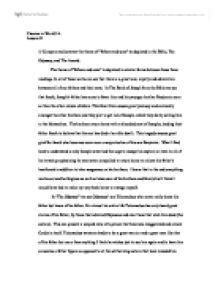 Compare and contrast the theme of &quot;fathers and sons&quot; as depicted in the Bible, The Odyssey, and The Aeneid.

Classics in World Lit. Lesson #1 1/ Compare and contrast the theme of "fathers and sons" as depicted in the Bible, The Odyssey, and The Aeneid. The theme of "fathers and sons" is depicted in similar forms between these three readings. In all of these works we see that there is a great love, loyalty and admiration between all of our fathers and their sons. In The Book of Joseph from the Bible we see that Jacob, Joseph's father has come to favor him and his younger brother Benjamin more so than the other eleven children. This favoritism causes great jealousy and animosity amongst the other brothers and they plot to get rid of Joseph, which they do by selling him to the Ishmaelites. The brothers return home with a bloodied coat of Josephs, leading their father Jacob to believe that his son has died a horrible death. This tragedy causes great grief for Jacob who becomes even more overprotective of his son Benjamin. What I find hard to understand is why Joseph never had the urge to escape his captors or even in all of his travels prophesizing he was never compelled to return home to relieve his father's heartbreak in addition to take vengeance on his brothers. I know that in the end everything works out and he forgives as well as takes care of his brothers and family but I think I would have had to make my way back home to avenge myself. ...read more.

Penelope works on this everyday only to unravel all that she has done during the night so that the burial shroud will never be truly finished. This is very clever of Penelope and shows that she and Odysseus are matched in wit and cleverness. I wonder why Penelope even entertained the suitors or let them take over her home unless somewhere in her she was intrigued by all of the attention being put upon her. Circe and Calypso from "The Odyssey" and Dido from "The Aeneid" are characters that have been used to distract or divert our hero's from their true journeys home. Dido is shown as overly dramatic and driven by the power of love and how its loss can cause a person to take their own life. Goddesses such as Juno, Venus and Minerva bicker over who is more beautiful thus causing acts of revenge among them that reeks great havoc amongst the mortal population. The common line between all of these readings that I see is that women will always be the great diversion but not necessarily the downfall of man 3/ Using Joseph, Odysseus, and Aeneas as examples discuss the theme of the hero as wanderer. The theme of the hero as the wanderer is prevalent in each of the underlying story lines for which our hero's Joseph, Odysseus, and Aeneas prevail. Each of these characters had different goals to accomplish, some of their own free will and others by the will of Gods who claimed their destiny to be fate. ...read more.

This code was very important in a time when traveling great distances away from ones own home could be a frightening and extremely difficult task. This is a task that a person would be unable to do if not for the hospitality and kindness of foreigners in a foreign land. Harsh punishment was laid down for those who chose not to help a wayward traveler in need. If Eumaeus had not helped the vagabond Odysseus the outcome may not have been the same. Odysseus would probably not even have been allowed into his house dressed in his disguise. This code seems to be more of a moral code that is even seen in the Bible, a code that simply states to help another person in need out and goodness will come back to you, or you hope it will. I have been to a few places in Europe where I have lived and visited including Greece and I must say that people are willing to help and are just very hospitable in foreign countries. Maybe because we have as Americans become so jaded especially after what has happened in the last two years, maybe in time we will come around and change our attitudes to those that are not so familiar to us. Just a note: I'm sorry for the delay on this first lesson. The first three weeks of the semester was very trying I was away for a week down south for a family funeral and found it hard to get back into the groove. I am finding this class very challenging so bear with me. Thanks ...read more.