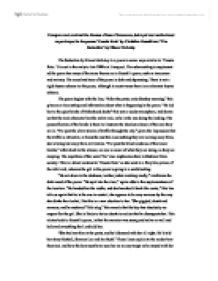 Compare and contrast the themes of loss of innocence, betrayal and motherhood as portrayed in the poems 'Cousin Kate' by Christina Rosetti and 'The Seduction' by Eileen McAuley

Compare and contrast the themes of loss of innocence, betrayal and motherhood as portrayed in the poems 'Cousin Kate' by Christina Rosetti and 'The Seduction' by Eileen McAuley The Seduction by Eileen McAuley is a poem in some ways similar to 'Cousin Kate.' It is set in the early to late 1980s in Liverpool. The urban setting is unpleasant ad the poem has many of the same themes as in Rosetti's poem, such as innocence and naivety. The mood and tone of the poem is dark and depressing. There is not a rigid rhyme scheme to this poem, although in most verses there is an alternate rhyme scheme. The poem begins with the line; "After the party, early Sunday morning," this gives us a time setting and information about what is happening in the poem. "He led her to the quiet bricks of Birkenhead docks" this sets a seedy atmosphere, and shows us that the male character has the active role, as he is the one doing the leading. The personification of the bricks is there to illustrate the absolute silence of the area they are in. "Far past the silver stream of traffic through the city," gives the impression that the traffic is attractive, or beautiful and this is something they are moving away from, she is being led away from civilization. "Far past the blind windows of the tower blocks," refers back to the silence, no one is aware of what they are doing, as they are sleeping. ...read more.

The high shoes also represent the girl trying to be grown-up. The theme of purity was also used in 'Cousin Kate' and the colour white was symbolized on a dove. "All wide blue eyes," signifies her innocence. "And sat in the dark, her head rolling forward, Towards the frightening scum on the water," this line connotes the danger she is getting closer and closer to, she has lost complete control and cannot turn back. "The Mersey, green as a septic wound," this unpleasant simile adds to the grim reality of her situation. "Then, when he swiftly contrived to kiss her, His kiss was scented by Listerine," this confirms that he had planned to use her along and his kiss is illustrated as being chemical and nasty. "And she stifled a giggle," demonstrates her childish immaturity. "Reminded of numerous / Stories from teenage magazines..." brings up the theme of the fantasy world she lives in. "When she discovered she was three months gone, She sobbed in the cool locked darkness of her room" she has found out that she is pregnant, and she doesn't know how to deal with her sudden change of future. "And she ripped up all her My Guy and her Jackie photo-comics, until they were just bright paper, like confetti, strewn"! This line describes how she has left her childhood and her magazines were part of her fantasy world she had made up about being an adult. The confetti is paradoxical because she is not going to get married, the boy used her, and it is very doubtful that he will wed her. ...read more.

However, the girl in McAuley's poem was extremely unhappy with her situation and was unable to find any positive aspect of it. She saw her pregnancy as a curse, a waste of youth. I think that McAuley's poem is more poignant because at the end of it, it did not get any better for the girl. At least in 'Cousin Kate' she was able to have some small revenge, in that the Lord's wife was infertile, but the girl in 'The Seduction' was left scared, and unable to tell anyone about her mistake pregnancy. In 'Cousin Kate,' the man, who she loved, and by her cousin, who stepped in and took it away from her, betrays the narrator. In 'The Seduction,' her magazines that had promised her a blissful life with the boy-next-door betray the girl. Both portray the girls' innocence and ignorance. I found the poem sad and emotional, as the women were simply used by men who had no morals. I thought that 'The Seduction' was darker and more depressing than 'Cousin Kate' as the setting was dirty and seedy and the plot grittier, it made it more disturbing to read. There was no light at the end of the tunnel for the girl in McAuley's poem, we were left with the image of her being scared and alone. I think that because of the more depressing tone of the poem, 'The Seduction' was more effective in showing us the careless evil of some people in life. However, I think that 'Cousin Kate' is still as effective and relevant today as it was one hundred years ago, it shows us that some things never change. ...read more.