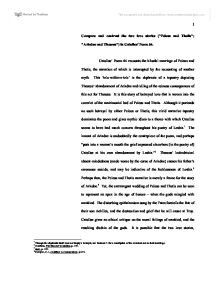 Compare and contrast the two love stories ("Peleus and Thetis"; "Ariadne and Theseus") in Catullus' Poem 64. Catullus' Poem 64 recounts the blissful marriage of Peleus and Thetis, the narration of which is interrupted by the recounting of another myth. This 'tale-within-a-tale' is the ekphrasis of a tapestry depicting Theseus' abandonment of Ariadne and telling of the ruinous consequences of this act for Theseus. It is this story of betrayed love that is woven into the coverlet of the matrimonial bed of Peleus and Thetis. Although it portends no such betrayal by either Peleus or Thetis, this vivid narrative tapestry dominates the poem and gives mythic idiom to a theme with which Catullus seems to have had much concern throughout his poetry of Lesbia.1 The lament of Ariadne is undoubtedly the centrepiece of the poem, and perhaps "puts into a woman's mouth the grief expressed elsewhere [in the poetry of] Catullus at his own abandonment by Lesbia."2 Theseus' lackadaisical absent-mindedness (made worse by the curse of Ariadne) causes his father's erroneous suicide, and may be indicative of the fecklessness of Lesbia.3 Perhaps then, the Peleus and Thetis narrative is merely a frame for the story of Ariadne.4 Yet, the extravagant wedding of Peleus and Thetis can be seen to represent an apex in the age of heroes - when the gods mingled with mankind. The disturbing epithalamium sung by the Fates foretells the fate of their son Achilles, and the destruction and grief that he will cause at Troy. ...read more.

Agricultural tools are left to rust in the abandoned fields: "nobody tills the land...the trailing vines Escape the curved rake's discipline; no oxen Thrust the share hard down, ripping clods...and a rough Tetter of rust flakes the forgotten plough."(43-48). In contrast, Ariadne, who awakens from her sleep on the beach to find her lover gone, feels the raw pain of desertion on an emotional level: "We know how, waking, In a hysteria of grief she fetched Scream after scream from the deep well of anguish"(135-37) The final lines of the poem contain Catullus' ethical critique of the abandonment of moral codes by man and describes the falling of mankind into total degradation: "Brothers plunged hands in the blood of brothers, children Ceased mourning for their parents... And vicious mothers seduced innocent boys In blasphemous outrage of the household gods"(437-42) The consequential desertion of mankind by the gods is therefore due to mankind's downward spiral into perversion: Till, right and wrong, virtue and vice, all weltering In mad perversity, we so estranged And horrified the minds of the good gods That they no longer condescend to join Men's feasts and festivals..."(443-47) The theme of abandonment is therefore demonstrated in both stories; the land itself is abandoned, Ariadne is left to die by her lover, man abandons his moral codes, and in turn, the gods abandon man. Consistently the imagery of b*****s throughout the poem evokes the role of women as mothers and nurturers. ...read more.

I do not believe that it detracts at all from the positive outcome of Ariadne's story, where she is eased of her grief and at last attains a love like that of the goddess Thetis and her husband Peleus. 11 Wiseman, T.P., Catullus & His World: A Reappraisal, p. 180. Wiseman gives a wonderful explanation for Catullus' reasoning and intentions: "Catullus may not rewrite the happy ending, but he can overshadow it by lavishing all his attention on the anguish, and leaving the felicity wholly unemphasised...What we are shown is not the meeting of Ariadne and the god, not the joy and glory he brings her, but only his outlandish and barbarous company."p.180. 12 Fitzgerald, W., Catullan Provocations, p. 143. Fitzgerald claims that the poem's unity can be found, "in the theme of the union of gods and mortals, whose dark counterpart is the story of the abandoned Ariadne." p. 143. See also: Konstan, D., Neoteric Epic: Catullus 64, from Roman Epic. Konstan sees the unity of this theme as being passion: "Some have detected an analogy between Bacchus' love for Ariadne in the final panel of the ekphrasis and Thetis' assent to marriage with Peleus: two instances of passion joining a mortal and a divinity." p. 66 13 Fitzgerald, W., op. cit., p. 156. 14 Fitzgerald, W., op.cit., p. 150. In regards to Thetis and the Nereids, the Latin used is 'nutricum' - nutrix means 'nurse' or 'foster mother'. The inference to these women as potential mothers is stressed further with the depiction of Ariadne's b*****s; 'lactentis...papillas', meaning 'suckling', 'milky', 'juicy', or 'full of milk' b*****s. ?? ?? ?? ?? 1 ...read more.