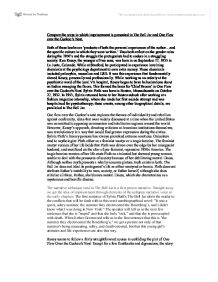 Compare the ways in which imprisonment is presented in The Bell Jar and One Flew over the Cuckoo's Nest. Both of these books are 'products of both the personal experiences of the author...and the specific culture in which they were written.' Thus both reflect on the gender roles during the 1950's and the struggle the protagonists had to endure in a struggling society. Ken Kesey, the younger of two sons, was born in on September 17, 1935 in La Junta, Colorado. While at Stanford, he participated in experience involving chemicals at the psychology department to earn extra money. These chemicals included psilocybin, mescaline and LSD. It was this experience that fundamentally altered Kesey, personally and professionally. While working as an orderly at the psychiatric ward of the local VA hospital, Kesey began to have hallucinations about an Indian sweeping the floors. This formed the basis for 'Chief Broom' in One Flew over the Cuckoo's Nest. Sylvia Plath was born in Boston, Massachusetts on October 27, 1932. In 1953, Sylvia returned home to her Boston suburb after working at a fashion magazine internship, where she made her first suicide attempt and was hospitalized for psychotherapy; these events, among other biographical details, are paralleled in The Bell Jar. One flew over the Cuckoo's nest explores the themes of individuality and rebellion against conformity, ideas that were widely discussed at a time when the United States was committed to opposing communism and totalitarian regimes around the world. However, Kesey's approach, directing criticism at American institutions themselves, was revolutionary in a way that would find greater expression during the sixties. Sylvia Plath's literary persona has always provoked extreme reactions. Onlookers tend to mythologize Plath either as a feminist martyr or a tragic heroine. The feminist martyr version of her life holds that Plath was driven over the edge by her misogynist husband, and sacrificed on the altar of pre-feminist, repressive 1950s America. ...read more.

'...Only I wasn't steering anything, not even myself. I just bumped from my hotel to work and to parties and from parties to my hotel and back to work like a numb trolleybus...' This quotation, which concludes the first section of Chapter 1, describes the disconnect Esther feels between the way other people view her life and the way she experiences her life. By all external measures, Esther should feel happy and excited. She has overcome her middle-class, small town background with luck, talent, and hard work, and her reward is a glamorous month in New York. Although she recognizes these objective facts, Esther feels uncertain both about her own abilities and about the rewards that these abilities have garnered her. To her own puzzlement, she does not find New York thrilling and romantic. Instead, she finds it dizzying and depressing, and she finds the fashion world she inhabits superficial and disorienting. The feeling of numbness that Esther describes here is the kernel of the madness that will soon overtake her. Eventually, the gap between societal expectations and her own feelings and experiences becomes so large that she feels she can no longer survive. I think the stream of consciousness and the issue of reliability is an important factor in discussing the imprisonment of the narrators. I think the flashbacks which illuminate the characters illustrate the emotions of both narrators and show the realness of their stories. Bromden has numerous nightmares and I think nightmares are part of our personality, of our own individual truths. 'Lot like the sound you hear when you're standing late at night on top of a big hydroelectric d*m.' This shows Bromden's displaced Indian background and almost seems surreal, hinting that Bromden had a more natural previous life. Bromden has his own truth, excisting in his own mind 'But if they don't excist, how can a man see them?' ...read more.

Nolan, a progressive female psychiatrist. The three methods of 1950s psychiatric treatment-talk therapy, insulin injections, and electroshock therapy-work for Esther under the proper and attentive care of Dr. Nolan. Even properly administered therapy does not receive unmitigated praise, however. Shock therapy, for example, works by clearing the mind entirely. After one treatment, Esther finds herself unable to think about knives. This inability comes as a relief, but it also suggests that the therapy works by the dubious method of blunting Esther's sharp intelligence. Similarly, the electric shock treatment represents oppression from Nurse Ratched in One Flew over the Cuckoo's Nest. The electroshock therapy table is explicitly associated with crucifixion. It is shaped like a cross, with straps across the wrists and over the head. Moreover, the table performs a function similar to the public crucifixions of Roman times. McMurphy increasingly becomes identified with Christ, from the crucifixion on the electroshock therapy table preceded by the patient "washing his hands of the whole affair" to the echoes of the Last Supper when Billy Bibbit engages in s****l relations with Candy Starr. Like Christ, McMurphy sacrifices himself for the benefit of the group, and in doing so, he loses his free will. Plath uses characters such as buddy Willard, using a clever writing technique to show his relationship with others, how people viewed him, his actions and physical description 'To the person in the bell jar, blank and stopped as a dead baby, the world itself is the bad dream.' This quotation comes from the last chapter of the Bell Jar, in which Esther attempts to draw some conclusions about the experiences she has undergone. Her mother suggests that they treat Esther's madness as if it were a bad dream that can be forgotten. This quotation records Esther's inward response; she feels that madness is like being trapped in a bad dream, but it is a bad dream from which one cannot awake. Esther likens the person who suffers from mental illness to the pickled foetuses she saw at Buddy's medical school, a morbid connection that illustrates the terror of madness. In conclusion, ...read more.