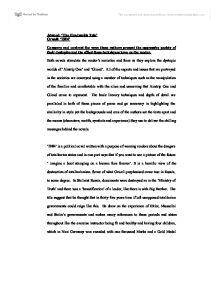 Compare and contrast the ways these authors present the oppressive society of their dystopias and the effect these techniques have on the reader.

Atwood: 'The Handmaids Tale' Orwell: '1984' Compare and contrast the ways these authors present the oppressive society of their dystopias and the effect these techniques have on the reader. Both novels stimulate the reader's anxieties and fears as they explore the dystopic worlds of 'Airstrip One' and 'Gilead'. All of the aspects and issues that are portrayed in the societies are conveyed using a number of techniques such as the manipulation of the familiar and comfortable with the alien and unnerving that Airstrip One and Gilead come to represent. The basic literary techniques and depth of detail are paralleled in both of these pieces of prose and go someway in highlighting the similarity in style yet the backgrounds and eras of the authors set the texts apart and the means (characters, motifs, symbols and experience) they use to deliver the chilling messages behind the novels. '1984' is a political novel written with a purpose of warning readers about the dangers of totalitarian states and in one part says that if you want to see a picture of the future ' imagine a boot stamping on a human face forever'. It is a horrific view of the destruction of totalitarianism. Some of what Orwell prophesised came true in Russia, to some degree. In Stalinist Russia, documents were destroyed as in the 'Ministry of Truth' and there was a 'beautification' of a leader, like there is with Big Brother. The title suggest that he thought that in thirty-five years time if left unopposed totalitarian governments could reign like this. He drew on the experience of Hitler, Mussolini and Stalin's governments and makes many references to these periods and states throughout like the exercise instructor being fit and healthy and having four children, which in n**i Germany was awarded with one thousand Marks and a Gold Medal which due to the vast propaganda campaigns were highly prized especially during a period of economic hardship. ...read more.

In '1984' Syme notes the 'beauty' of Newspeak and states that the ultimate goal is to end the 'wastage' in verbs and adjectives to reach and end where the whole notion of 'goodness and badness', for example, is covered, 'in reality, by only one word'. He fully encompasses the party's belief and states that the destruction of words is a 'beautiful thing'. He makes the changes sound attractive but there has to be a lot of doubt in expression being fulfilled in one word. He says that 'Newspeak' has a 'beauty' and that destruction is 'beautiful' and the repetition of this word is there to bring people around to the positive nature but it makes his language seem boring and so the limited use of words doesn't appeal and sets up an opposition to the restriction. Syme also notes that thoughtcrime will be impossible as there will be 'no words in which to express it' and in the end, every concept can be expressed by 'exactly one word, with its meaning rigidly defined'. It's contradictory that you can be expressive using just one word, when, entail, it's meaning has been rigidly defined. Rigidity and expressiveness have antithetical meanings. The extent to which the Party wishes to carry Newspeak and the exploration of this depth in '1984' contrasts the degree to which language as a whole is manipulated in 'The Handmaids Tale'. While they have banned the word 'free' and changed the Handmaid's names they aren't striving to reduce language to a few words. Most of the action the have taken such as the renaming of handmaid's and taking the names off of shop signs is to prevent women from reading in a bid to limit their power and while it is the states aim to prevent opposition they haven't gone to the same length as the party in '1984'. What is paralleled in the novels is the fear of thoughts and conversations being detected and overheard. ...read more.

She draws on her experience and thoughts on different issues to illustrate a world where these things are taken to an extreme but shows how easily it can escalate. It isn't a threat because she isn't going to do anything to bring about this world but like '1984' it does serve a stark warning of what could happen. Atwood looked at vociferous groups who were now seeking to reverse all the changes that had benefited women in the 1970s and this is a form of warning against their ideas and the separatist ideas of many radical feminists like Offred's mother who Offred believed had a hand in creating the new society. She says: 'You wanted a women's culture. Well, now there is one. It isn't what you meant, but it exists. Be thankful for small mercies'. Atwood acknowledges that you need men and women to build a relationship. Roland Darthis said that authors can't put meanings into texts as a piece only comes into existence on the reading of it. It is the reader that imposes meaning. But both Orwell and Atwood stated that there is meaning in these texts and they have carefully selected language and techniques to deliver these messages. Both authors present similar fears and warnings through their writing and similar techniques. The thing that shapes their specific presentation is the time in which they wrote in and the social climate that forced them to sculpt it in such a way as to be accepted by the majority of readers. Their own backgrounds and beliefs heavily affect the way they write and these in turn have effect on different people yet the conclusion is very similar. Orwell wrote in a letter in 1946 that: 'every line of serious writing since 1936 has been written directly or indirectly against totalitarianism and for democratic socialism' They are both political texts, which seek a redress on certain issues to prevent these oppressive societies in their dystopias becoming our shared dystopic world. ...read more.