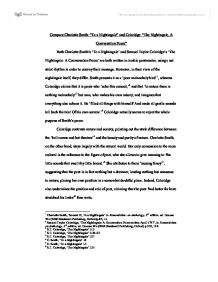 Compare Charlotte Smith: "To a Nightingale" and Coleridge: "The Nightingale, A Conversation Poem" Both Charlotte Smith's 'To a Nightingale' and Samuel Taylor Coleridge's 'The Nightingale: A Conversation Poem' are both written in iambic pentameter, using a set strict rhythm in order to convey their message. However, in their view of the nightingale itself, they differ. Smith presents it as a 'poor melancholy bird'1, whereas Coleridge claims that it is poets who 'echo this conceit,'2 and that 'in nature there is nothing melancholy'3 but man, who makes his own misery, and imagines that everything else echoes it. He 'filled all things with himself/ And made all gentle sounds tell back the tale/ Of his own sorrow.'4 Coleridge actually seems to reject the whole purpose of Smith's poem. Coleridge contrasts nature and society, pointing out the stark difference between the 'ball rooms and hot theatres'5 and the beauty and purity of nature. Charlotte Smith, on the other hand, stays largely with the natural world. Her only concession to the more cultural is the reference to the figure of poet, who she allows to give meaning to 'the little sounds that swell thy little breast.'6 She attributes to ...read more.

Iambic pentameter is believed to be a close representation of the natural rhythm of human speech. In addition to this, he draws the reader into his world to make it a conversational poem: it is addressed to the reader. It is to us, the readers, that he speaks, not some third person within the poem: 'You see the glimmer of the stream beneath,'13 and even makes the reader a friend and companion: 'Come, we will rest on this old mossy bridge.'14 This is in contrast to Smith, who speaks only to herself, or at the end of the poem, to the nightingale, although this is in more of a rhetorical manner, she views the nightingale as nothing but an animal, who cannot know the emotion of a human. The relationship of mankind to nature is explored in both pieces, and both deem nature to be the better of the two. Smith places her own position in life as far below what she deems a 'poor melancholy bird'15 in terms of happiness and fulfilment, since she cannot escape to 'woodlands wild'16, nor has the nightingale 'felt from friends some cruel wrong'17 or been made 'martyr of disastrous ...read more.

in his references to his own son, although he harks back to the greatness of nature over humanity in quieting his son in order to appreciate nature: 'And he beheld the moon, and, hushed at once,/ Suspends his sobs and laughs most silently.'26 Silence is suggested in other parts of the piece: they 'hear no murmuring'27 from the river. All but the nightingale must be silent to allow Coleridge to build his fantastical world around him, the world of castles and maidens and love and 'so many nightingales.'28 Both of these pieces carry the same title, but yet very different messages about the natural world. Coleridge regards it as the pinnacle of all things, the true greatness, whereas Smith regards it as beautiful, certainly, but innocent, its value being that it cannot comprehend suffering as a human. Coleridge places it far above humanity, a constant aspiration, whereas Smith values human culture above nature, treats it as, perhaps, a child. Her view of childhood in this sense seems to be naivety, rather than Coleridge's view of the beauty and purity of childhood as closer to the wonder of nature, and, as such, greater than the adult man. ...read more.