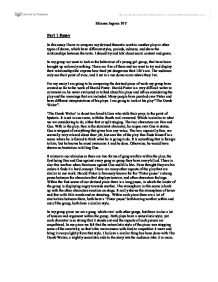 Compare my devised thematic work to another play or other types of drama, which have different styles, periods, cultures, and show the relationships between the texts.

Part 1 Essay In this essay I have to compare my devised thematic work to another play or other types of drama, which have different styles, periods, cultures, and show the relationships between the texts. I should try and talk about social context and genre. In my group we want to look at the behaviour of a young girl group, that have been brought up on barely nothing. There are five of them and we want to try and display their relationships the express how hard yet dangerous their life's are. The audience only see their point of view, and it set in a run down room where they live. For my essay I am going to be comparing the devised piece of work my group have created so far to the work of Harold Pinter. Harold Pinter is a very difficult writer to comment on, he never evaluated or talked about his plays and left us considering the play and the meanings that are included. ...read more.

There is also this warfare when Ben turns against Gus and kills him. Even thought they are his orders it finds it a hard concept. There are many other aspects of the play that are similar to our work. Harold Pinter is famously known for the 'Pinter pause' a strong pause between the characters that displays tension, and often characters feelings. Within the first scene of our devised piece there is a long pause, in which the leader of the group is displaying angry towards another. The atmosphere in this scene is back up with the other characters reaction on stage. It really shows the atmosphere of terror and fear with little words and no shouting. Within each piece there are a lot of similarities between them, both have a 'Pinter pause' both having warfare within and out of the group, both have a similar style. In my group piece we are a gang, which rival with other gangs, but there is also a lot of tension and argument within the group. ...read more.

The story line and morals are relevant where ever it is set. Again this is similar to my group piece. It is a story about a girl gang and how they react and interact together, it doesn't matter where the story is set, the synopsis would still be the same. On a whole these two pieces are very similar, in the structure and basis of each play. Neither of them have been strongly influenced by any thing in society, for example how in The Caucasian Chalk Circle there was a war on when it was wrote, and this was reflected in the play. Although Harold Pinter never commented on his plays and so it is for us to decide if anything really influenced him. The only points that influenced us in our script work were youngsters and drugs. The increasing number of young people taking drugs and becoming criminals, but this tied in with our theme of Gang Warfare. I presume Harold Pinter was influenced by crime, and murders. Rhianna Ingram 10Y ...read more.