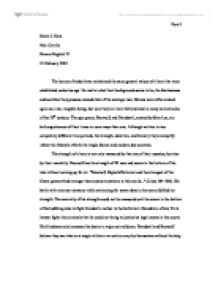 Compare the heroic status of Beowulf and Daredevil.

Kevin J. Furst Mrs. Catrillo Honors English 12 21 February 2004 The heroes of today have maintained the same general values of a hero that were established centuries ago. No matter what their background seems to be, the fearlessness and sacrifice they possess exceeds that of the average man. Heroes were often looked upon as a real, tangible being, but now they are more fictionalized in many comic books of the 20th century. The epic poem, Beowulf, and Daredevil, created by Stan Lee, are both superheroes of their times in more ways than one. Although written in two completely different time periods, the strength, devotion, and bravery they exemplify reflect the lifestyle of both the Anglo-Saxon and modern day societies. The strength of a hero is not only measured by the size of their muscles, but also by their mentality. Beowulf has the strength of 30 men and swam to the bottom of the lake without coming up for air. "Beowulf, Higlac's/Follower and the strongest of the Geats-greater/And stronger than anyone anywhere is this world..." (Lines 194-196). His battle with nine sea monsters while swimming for seven days in the sea solidified his strength. ...read more.

Beowulf shows his devotion to Hrothgar when he travels the seas to help fight the monsters that have terrorized his people. Beowulf "Heard how Grendel filled the night with horror/And quickly commanded a boat fitted out, /Proclaiming that he'd go to that famous king." (197-199). Soon after he set sail and landed on the shores of Denmark he is looked upon as something greater than just a man, he is looked at as a savior. Beowulf single-handedly saves the people of Denmark from Grendel and his mother. When he returns to Sweden barring gift for his king it shows his strength and fame were no match for the monsters in Denmark. Daredevil experienced the same complexities when he is faced with sudden blindness and the death of his father. Although this is a crippling ordeal, he is empowered to save the people of New York City from all criminals and villains who evade his justice and prosecution. He will remain on the hunt for the villains until the city has no more crime and avenges his father's death. Both Beowulf and Daredevil must embark on journeys of their own to reach the people who are in need of their help. ...read more.

No matter what came across their paths, their hearts always played a role in their decisions and made for a fair fight. It was man against man the whole way through. Beowulf fought a good clean fight when he battled Grendel with out any armor or weapons. Grendel is no braver, no stronger Than I am! I could kill him with my sword; I shall not, Easy as it would be. This fiend is a bold And famous fighter . . . I will meet him With my hands empty-unless his heart Fails him, seeing a soldier waiting Weaponless, unafraid. (677-685) Bravery is the one quality that overthrow all of the other qualities that a hero can inherit. Although Beowulf and the Daredevil are from two different time periods they share the same essential characteristics of devotion, strength, and bravery. These two men went from heroes to superheroes in the end and extended the reaches of the mold they came from. Their characteristics allowed both of them to accomplish there personal goals and to bring peace and happiness to others. If there is not a story about your legacy somewhere in time, than you are not a hero in the eye of the beholder. All heroes come from many different backgrounds, but no matter where they come from they fit the mold. Furst 1 ...read more.