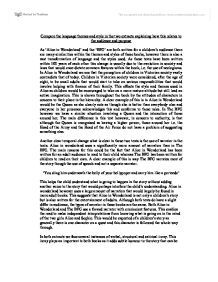 Compare the language themes and style in the two extracts explaining how this relates to the audience and purpose.

Compare the language themes and style in the two extracts explaining how this relates to the audience and purpose As 'Alice in Wonderland' and the 'BFG' are both written for a children's audience there are many similarities within the themes and styles of these books, however there is also a vast transformation of language and the styles used. As these texts have been written within 100 years of each other this change is usually due to the evolution in society and laws that would once dictate common features within the book, i.e. the use of neologisms. In Alice in Wonderland we see that the perception of children in Victorian society vastly contradicts that of today. Children in Victorian society were considered, after the age of eight, to be small adults that would start to take on serious responsibilities that would involve helping with finance of their family. ...read more.

Alice in wonderland uses a significantly more amount of narration than in The BFG. The main reasons for this could be the fact that Alice in Wonderland has been written for an adult audience to read to their child whereas The BFG has been written for children to read on their own. A clear example of this is way The BFG narrates most of the story though the use of speech and not a separate narrator. 'You sling him underneath the belly of your bellypoper and carry him like a porteedo' This helps the child understand what is going to happen in the story without adding another voice to the story that would perhaps interfere the child's understanding. Alice in wonderland however uses a large amount of narration that would largely be found in more adult books. This suggests that Alice in Wonderland is not only a children's story but is also written for the entertainment of adults. ...read more.

This circumstance shows the satirical outlook of Victorian society that Lewis Carroll often hints on throughout the whole of Alice in Wonderland. The BFG however uses a strong use of verbal irony especially in this extract when the BFG is interacting with other humans who are not used to his fictional dialect. 'And one from Wellington, in New Zealand,' said the Head of the Army 'For the booty flavour!' cried the BFG.' This shows how a simple change in semantics, to which the BFG and the other giants have learnt, has lead to a completely different context that becomes confusion. This verbal irony also shows how those who are older and used to received pronunciation find it harder to understand what the BFG is saying as we see several times that Sophie must translate for the Head of the Army and the Head of the Air Force. ...read more.