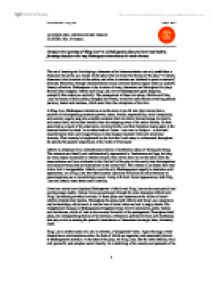 Compare the opening of 'King Lear' to a Shakespeare play you have read before, focusing closely on the way Shakespeare introduces the main themes.

A2 ENGLISH LITERATURE ESSAY TUTOR: Mr. D Anson Compare the opening of 'King Lear' to a Shakespeare play you have read before, focusing closely on the way Shakespeare introduces the main themes. The act of creating and developing a character called characterization not only establishes a character, but serves as a means for the play write to reveal the themes of the play; "A literary character is the invention of the author, and often inventions are indebted to prior inventions", (Kirsch). Therefore, through characterization many common themes repeat within an author's literary collection. Shakespeare is the inventor of many characters and throughout his plays themes often reappear. Othello and King Lear, two of Shakespeare's great tragedies, exemplify this technique explicitly. The protagonists of these two plays, Othello and King Lear, by means of their actions, thoughts and words, reveal the same themes revolving around jealousy, hatred and madness, which stem from the corruptions of the time. In King Lear, Shakespeare introduces to us the story of an old man who moves from a position of encompassing enormous power, status, wealth, responsibility, social complexity, and security, step by step into a terrible isolation from his fellow human beings, his family, and nature itself, and suffers horribly from the stripping away of his entire identity. He then goes mad as a result of his experience, recovers briefly, and then becomes insane again in the moment before his death. ...read more.

It is important to note that he quarrels with Cordelia for spoiling his self-flattering court pageant with extraordinary speed and violence, through which his response tells the audience at once that we are witnessing here an enormously powerful ego which simply cannot accept any external check on his sense of how he should be treated because of who he is. Similar is the case to Othello, whose rash attitude towards Desdemona's loss of his handkerchief transforms the order into complete disorder. Stanley Cavell, former Shakespearean critic, suggested that all of Lear's actions, from the very opening to the end of the play, stem from a desire to avoid shame, to avoid accepting the world rather than demanding it answer to him, because accepting the world would mean that he would have to allow the world to recognize him for who he is. Lear's persistent refusal to express love and let others, especially Cordelia, express their love openly and honestly stems from something he senses about himself and does not wish to reveal to the world. Again, once Iago manipulates Othello against Desdemona's disloyalty, he sees her plea as a futile attempt to lure him, just as Lear misinterprets Cordelia. An association between Cordelia and death in the opening scene of the play is comprehensible even on a literal level. Freud contends that her silence directly connotes death, as muteness does in dreams. ...read more.

What Bradley calls fate can be seen on closer scrutiny to be an expression of a life principle. In Othello the violent forces unleashed by the social consciousness of Venice against the transgression of its values and the natural defensive mechanism in social life seek to r****d or destroy any attempt to rise above the common existence toward some ideal condition: in this case, the romantic dream of a perfect love. Life acted at the point of weakness - Desdemona's ignorant and blind initiative which failed to evaluate her own nature realistically, the effect on her father and the world around her, and Othello's impure lower nature whose capacity for rage and jealousy, necessarily negated the possibility of perfect love. King Lear is thus the culmination of a frequent Shakespearean theme, the idea that the forces of evil require for their operation, the willed neglect or ignorance about the responsibilities which sustain justice in the human community. It's the collapse of the moral order which sustains the idea that normal life always begins with an important lapse in the responsibility of those charged with maintaining it. This lapse may come from selfishness, ignorance, an egotistical preoccupation with one's own importance, or any other such cause. The important point is that once that occurs, those whom the moral order normally can deal with have opportunities to violate the traditional rules. One of the most reverberating issues in King Lear is the sense that evil is something normal, residing in the hearts of all people. SHAKESPEARE - King Lear FARAZ. RAFI 1 ...read more.