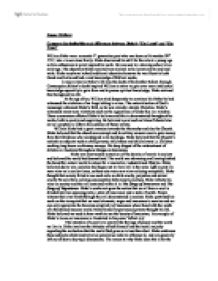 Emma Walford Compare the similarities and differences between Blake's 'The Lamb' and 'The Tyger' William Blake was a romantic 1st generation poet who was born on November 28th 1757, into a lower class family. Blake discovered his skill for the arts at a young age as him enthusiasm to paint inspired his work. He was sent to a drawing school at an early age. The education Blake received was minimal as he learnt only to read and write. Blake may have lacked traditional education however he was fluent in both Greek and Latin and had a vast knowledge of biblical works. A major event in Blake's life was the death of his brother Robert, through Consumption.Robert's death inspired William to strive to gain ever more intellectual knowledge especially to gain from and to pursue spiritual knowledge. Blake retained this throughout his life. At the age of ten, William tried desperately to convince his Father he had witnessed the visitation of an Angel sitting in a tree. The materialisation of God's messenger enhanced Blake's faith, as he was already a devote Christian. Blake's witnessed many more visitations such as the appearance of Gods face in a window. These occurrences affected Blake's believes and this is demonstrated throughout his works, both in poetry and engraving. He believed a poet such as himself should also act as a prophet, to inform his audience of future events. ...read more.

The tiger's natural habitat may be perceived as being evil and images of utter darkness are conjured in the readers mind. In the first stanza of 'The Lamb' , Blake poses a question to the lamb asking who its designer was: "Little lamb who made thee; Dost thou know who made thee?" This question is directed towards the lamb. The style of questioning is simply and easy to understand to such a meek animal. Blake addresses the lamb as a child and he an adult, by choosing to use the word "thee". The tiger is also questioned about who created it too: "What immortal hand or eye Could frame thy fearful symmetry." This is the same question asked to the lamb yet the tiger is questioned in a different, more mature. By saying "immortal" it could be describing God, as he is eternal. The "symmetry" may be a reference to the tiger's bodily stripes or an alternative reference could be that the tiger is nothing but evil on both sides. In 'The lamb' a continuation of the question is asking: "Give thee life and bid thee feed By the stream and o'er the mead." Blake continues to question the lamb's existence and lists all the fantastic gifts its initiator had given him. An example of the gifts is giving it the gifts of life and precious food to survive. In 'The tyger' the poet continues probing the tiger: "In what deeps or skies Burn the fire of thine eyes." ...read more.

This quotation refers to the fact Jesus is often called 'The Lamb of God'. Through informing the audience that Jesus and the lamb have the same name, Blake is elevating the status of the lamb to one equal to that of God, elevated from mankind. Blake continues to contrast the qualities of the lamb with Christ: "He is meek and he is mild He became a little child I a child and thou a lamb, We are called by his name." The poet paints a mental portrait of both Jesus and the lamb. Blake notifies the lamb that himself and Jesus were and are both children. Once again the lamb is set on equal status as God. The use of the words 'meek' and 'mild' generates a sense of humbleness and a quiet temperament about the lamb. Blake also mentions the detail that we are all lambs of God as we follow him and submit ourselves to his power. Blake finishes the poem with a sense of completeness and finality: "Little lamb, God bless thee, Little lamb, God bless thee." Blake emphasises the lamb's childlike nature once again by repeating himself twice. Blake tells the lamb at the very end who did make him In both poems Blake includes questioning in each. The manner in which Blake questions is diverse. Blake questions the lamb in a childlike and simple manner such as " Dost thou know who made me" yet the tiger is questioned is a complicated and uncertain manner. ...read more.