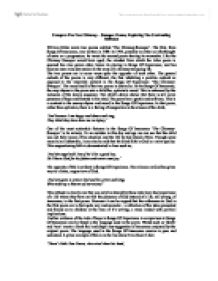 Compare The Two Chimney - Sweeper Poems, Exploring The Contrasting Attitudes William Blake wrote two poems entitled 'The Chimney-Sweeper'. The first, from Songs Of Innocence, was written in 1789. In 1794, possibly as either an afterthought of sorts or a progression, he wrote the second poem sharing its namesake. Like the Chimney Sweeper would have aged, the mindset from which the latter poem is spurned has also grown older, hence its placing in Songs Of Experience, and has become more wise yet cynical to the ways of a chimney sweeping life. The two poems are in some ways quite the opposite of each other. The general outlook of the poems is very different, the first inhabiting a positive outlook as opposed to the miserable outlook in the Songs Of Experience 'The Chimney-Sweeper'. The mood itself of the two poems is dissimilar. In the Songs Of Innocence, the easy rhyme to the poem sets a childlike, optimistic mood. This is enhanced by the inclusion of the dream sequence. The child's dream shows that there is still some presence of hope and fantasy in his mind. ...read more.

'And are gone to praise God and his priest and king, Who make up a heaven of our misery.' This attitude is clearly one that can only be shared by those who have had experience of a life where they have not felt the presence of God instead of a life, still young, of innocence, in the first poem. However it can be argued that the references to God in the first poem are in fact quite wry and sarcastic - a reflection of the ideas presented and forced on to children at the time of it's writing; a verse loaded with political implications. Further evidence of the lack of hope in Songs Of Experience in comparison to Songs Of Innocence can be found in the language used in the poem. Words such as 'death' and 'woe' create a bleak feel and dispel any suggestion of innocence conjured by the original poem. The language used in the Songs Of Innocence version is pure and untainted. A prime example of this is in the line about Tom Dacre's hair. ...read more.

One thing that Experience can hold over Innocence is the existence of memories. In Innocence, the child has nothing to look back to or compare. In Experience, the chimney-sweeper looks back on his happy memories from before when he was sent to work in the chimneys. 'Because I was happy upon the heath, And smiled along the winter's snow..' The ability to do this emphasises further the sour regret and despair that the chimney-sweeper in Experience is feeling. Despite this it appears that the chimney-sweeper has not developed any friends along the way to act like a comfort blanket in the way that the chimney-sweeper's friends do in Innocence. 'As Tom was a-sleeping, he had such a sight; That thousands of sweepers, d**k, Joe, Ned and Jack..' Although he would not have shared the usual childlike relationships we are accustomed to, the company alone contributes to the hopeful mood of the Innocence poem. The lack of this in Experience merely enhances the loneliness threaded throughout the poem, leaving the reader with a more sombre frame of mind, even if the Innocence poem is by no means cheerful. These are the predominant attitudes produced by the two Chimney-Sweeper poems. ...read more.