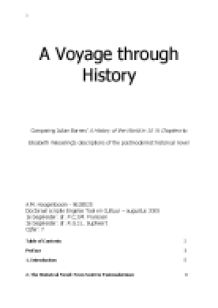 ï»¿A Voyage through History Comparing Julian Barnes’ A History of the World in 10 ½ Chapters to Elisabeth Wesseling’s descriptions of the postmodernist historical novel A.M. Hoogenboom - 9628525 Doctoraal scriptie Engelse Taal en Cultuur – augustus 2005 1e begeleider: dr. P.C.J.M. Franssen 2e begeleider: dr. R.G.J.L. Supheert Cijfer: 7 Table of Contents 2 Preface 3 1. Introduction 5 2. The Historical Novel: From Scott to Postmodernism 8 The Origination of the Historical Novel 8 Imitation and Emulation 10 The Passing of Scott’s Popularity and other Changes in the Literary Field 12 Changes in the Early Twentieth Century 15 The Development of Alternatives 16 From Modernism to Postmodernism 18 Postmodernist Self-Reflexivity 26 Historiography in the Making 27 History in the Making 29 3. Self-reflexivity in A History of the World in 10 ½ Chapters 30 Historiography in the Making 32 History in the Making 47 4. Counterfactual Fiction and Uchronian Fiction in A History of the 51 World in 10 ½ Chapters Counterfactual Conjecture 51 Uchronian Fiction 64 5. Reviewing the Results 70 Uchronian Fiction or Self-reflexivity 70 Parenthesis 74 Conclusion 85 References 87 ________________ Preface Writing this thesis has been quite a journey for me. Looking back, I cannot remember exactly why I chose to write my thesis on A History of the World in 10 ½ Chapters. I do remember that I took a class on postmodernist literature, taught by Aleid Fokkema, and that during this course I was introduced to the novel. Practical thinking made me consider a book for my thesis which I had become familiar with during one of the courses I had attended, and for some reason I ended up picking this novel. I asked Aleid Fokkema to be my mentor and she agreed. I think I started off doing not exactly badly, I increasingly spent less and less time on my thesis because to personal problems. Finally, I had to stop break off working on my thesis. For a year I did not study at all. ...read more.

Our panic and pain are only eased by soothing fabulation; we call it history. (242; italics mine) The words ?old stories that sometimes seem to overlap, strange links, impertinent connections? seem to describe some of what has been dealt with in this section on narrativity. As is the case with other fragments from ?Parenthesis,? the quoted passage seems to refer to the novel it is placed in.[25] This means that when Barnes is inserting ?strange links,? for instance, in the other ten chapters, he is not just aiming at thematics, or not aiming at thematics as a goal in itself. He is trying to say something about how he views history or historiography. For this reason I consider it plausible that at least part of the links between the various chapters are connected to the aspect of narrativity. Enclaves of authenticity The fifth element of ?historiography in the making? that will be examined is that of ?enclaves of authenticity,? or, in other words, ?signs that point toward the possibility of valid, authentic historical knowledge.? Examples of this are: ?a certain hierarchy of more or less trustworthy data,? or ?references to a known, realistic, factual historical context.?[26] Authenticity is hard to find in the novel. The narratives rather focus on the many elements that stand in the way of objective knowledge than giving hope that such knowledge exists. However, two minor fragments might give room for authenticity. In chapter nine, ?Project Ararat,? Spike Tiggler and his companion find human bones. Spike is convinced they have found Noah?s remains. However, scientific research proves that the bones belong to a woman who has died about a hundred and fifty years before. Besides showing how unreliable human perception of ?evidence? can be, this episode provides some sort of grip in the form of science. Science, however, is not only put in a positive light in this novel, for instance, in chapter seven, part two. ...read more.

In Postmodernism, self-reflexivity is continued. Also, a new kind of self-reflexivity appears, which does not reflect upon the making of historiography, but of history itself. It “questions the very existence of the res gestae as an independent level of historical discourse” (Wesseling 120).[48] Besides this, Postmodernist novelists […] depart from the traditional historical novel by inventing alternate versions of history, which focus on groups of people who have been relegated to insignificance by official history. In this way, unrealized possibilities that lie dormant in certain historical situations are brought to our attention (“What would have happened, if…?”). These apocryphal histories inject the utopian potential of science fiction into the generic model of the historical novel, which produces a form of narrative fiction one could call “uchronian.” In the course of describing self-reflexive and uchronian historical fiction, Wesseling has mentioned certain characteristics of both types of fiction. In chapters three and four of this thesis, the characteristics of postmodernist historical fiction have been “tried out” on a novel from 1989, Julian Barnes’ A History of the World in 10 ½ Chapters. This novel consists of ten and a “half” chapters, and deals with world history, but not in a conventional way. It has been interesting to find that this novel is quite concerned with self-reflexive issues. The novel displays a concern with self-reflexive issues such as the exposure of partial historical knowledge and narrativity. This last element explains peculiar reoccurrences of certain items, such as woodworms or bitumen.The counterfactual nature of Barnes’ novel is a less straightforward issue. A number of chapters convey narratives that are linked to historical data, but also differ from the historical data. And still, these differences between historical records and Barnes’ narratives are not easily labelled counterfactual either. Besides employing a playful way of dealing with historical data, Barnes also pays attention to the relationship between history and power. All in all, the novel can be seen as characterised by self-reflexivity. To label the novel as uchronian is a far more difficult venture. ...read more.