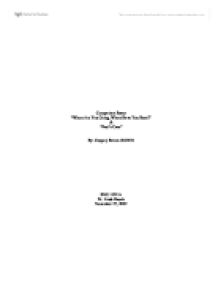 Comparison Essay "Where Are You Going, Where Have You Been?" & "Paul's Case" By: Gregory Berrea 2025631 ENG 1120 A Dr. Linda Hauch November 27, 2002 In "Where Are You Going, Where Have You Been?" and "Paul's Case," both main characters display similar qualities that lead them to encounters that inevitably destroy their innocence. Due to the ending of both teens lives one is able to come to the conclusion that their death was a result of no parental figure in their lives to instill morals and restrict freedom, there is a desire for romance at a young age, and a great deal of naivety in both teens. The striking similarities in the plot and characters of the two short stories "Where are You Going, Where Have You Been?" and "Paul's Case" show similarities in their negative conclusions. In "Paul's Case" the main character is living by his own morals. Paul's has decided for himself what is right and what is wrong. Paul was raised by his widowed father his whole life, "I happen to know that he was born in Colorado, only a few months before his mother died out there of a long illness" (Cather 537). Although the reader sees Paul's father as an honest man who is trying to better himself in this world through perseverance and hard work, Paul is trying to move up the echelons of society through stealing and lying. ...read more.

Paul had lied to schoolmates about his life, stating that he was about to travel or commence on an exciting journey, only to be making excuses for his presence at school the next day: "...In Paul's world, the natural nearly always wore the guise of ugliness, that a certain element of artificiality seemed to him necessary in beauty. Perhaps it was because of his experience of life elsewhere was so full of Sabbath-school picnics, petty economies, wholesale advice as to how to succeed in life, and the inescapable odors of cooking, that he found this existence so alluring... so attractive... It would be difficult to put it strongly enough how convincingly the stage theatre entrance of that theatre was for Paul the actual portal of Romance." (Cather 543). Paul thinks of this romance all the time. His days are spent suppressing his own unromantic life and replacing those memories with those of the fake romanticism of his own imagination. In "Where Are You Going, Where Have You Been?" Connie spends her days and nights dreaming of boys and romantic scenes: "Dreaming and dazed with the warmth about her as if this were a kind of love, the caress of love, and her mind slipped over onto thoughts of the boy she had been with the night before and how nice he had been, how sweet it always was" (Oates 696). Connie thinks about romance most of the time, this is how Conies gets in a compromising situation. ...read more.

He continues to call her "honey" and insist that she go for a ride with him. At this point in the story Arnold knows her name, all about her family and friends, and still she has a chance to run and save herself. Once Connie has realized that Arnold is not a kid and he has bad intentions, she has carried on too far to turn back, she has no idea where she is about to go. She is about to die due to her own na�ve mind. The two characters in these short stories inevitably become victims, not by choice, but by situations that could have been prevented. The two teens face many challenges of growing up lacking a father or mother figure to help guide them along the way. This is very difficult when trying to mold oneself as a person. The teens are unable to decipher the difference between right and wrong when put in romantic situations. The teens are enamored by the thought of romance in their youth. When the teens should be worrying about school and pimples these two teens are daydreaming of boys or operas. Lastly, these teens are very na�ve, even though they are young and inexperienced, they should have better sense than to steal money from your employer or to trust a strange man whom is twice her age. The prominent similarities in the characters traits prove their loss of innocence. One must assume that both of the teen's deaths could have been prevented. ...read more.