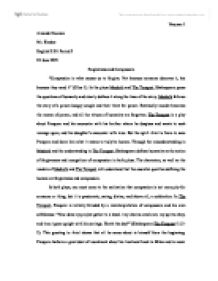 Compassion is what causes us to forgive. Not because someone deserves it, but because they need it&quot; (Giles 1). In the plays Macbeth and The Tempest

Amanda Nauman Mr. Rhodes English II H / Period 3 03 June 2005 Forgiveness and Compassion "Compassion is what causes us to forgive. Not because someone deserves it, but because they need it" (Giles 1). In the plays Macbeth and The Tempest, Shakespeare poses the questions of humanity and clearly defines it along the lines of the story. Macbeth follows the story of a power-hungry couple and their thirst for power. Eventually murder becomes the means of power, and all the virtues of humanity are forgotten. The Tempest is a play about Prospero and his encounter with his brother whom he despises and wants to seek revenge upon, and his daughter's encounter with love. But the spirit Ariel is there to save Prospero and show him what it means to truly be human. Through the misunderstanding in Macbeth and the understanding in The Tempest, Shakespeare defines humanity as the action of forgiveness and recognition of compassion in both plays. The characters, as well as the readers of Macbeth and The Tempest will understand that the essential qualities defining the human are forgiveness and compassion. In both plays, one must come to the realization that compassion is not mere pity for someone or thing, but it is passionate, caring, divine, and above all, a celebration. In The Tempest, Prospero is initially blinded by a misinterpretation of compassion and his own selfishness: "Now does my project gather to a head: / my charms crack not; my spirits obey; and time / goes upright with his carriage. ...read more.

good parent, did beget of him A falsehood in its contrary as great As my trust was; which had indeed no limit (Shakespeare The Tempest 1.2.112-6). Coursen believes that Prospero attempts to put Alonso and the other conspirators through a penitential experience, to evoke within each other a 'heart's sorrow' leading towards redemption. Prospero assumes that inflicted punishment upon Alonso will lead to his satisfaction. As he later finds out, his assumption is wrong and Ariel is there to help point him in the right direction: "Mine would, sir, were I human," then Prospero replies "the rarer action is / in virtue than in vengeance: they being penitent, / the sole drift of my purpose doth extend / not a frown further (5.1.26-38). Again, we see Ariel in the same situation telling Prospero that he needs to forgive these men. Coursen states that The Tempest exposes not only folly but sin and repentance; and it also exposes the extent and limits of man's control over the inner lives of other men. Prospero recognizes his mistake and states that it is harder to forgive than to punish, and that understanding along with the importance of compassion ultimately defines Prospero as attaining the definition of humanity. Opposite Prospero is Macbeth in Macbeth who doesn't understand the meaning of forgiveness at all: "O, yet I do repent me of my fury / that I did kill them." (Shakespeare Macbeth 2.3.124-5). Prospero says this statement without real meaning because he does not really care for the chamberlains that he killed since they only got in the way. ...read more.

Evans plainly makes it clear that if Macbeth is regarded as a tragic hero, he would no doubt be sympathized with. But if one looks at Macbeth for what he really is, he is going to gain far less sympathy because he is simply a "moral idiot" who cares only about his personal gains and never about anyone else or humanity. Through colonialism and Macbeth as an ignorant "moral idiot," one greater appreciates the virtues of compassion and forgiveness because they are lost in such events during the play. One must come to the conclusion that humanity can be defined by two mere virtues: compassion and forgiveness. Shakespeare emphasizes these two qualities in The Tempest and Macbeth to prove their importance. One cannot have forgiveness without compassion, and without either, a person's life means nothing. This understanding that Shakespeare gives us for humanity is so enlightening because one truly realizes the significance. To feel true compassion is to truly be human. To forgive someone rather than punish them is so much more uplifting and an even greater accomplishment. Prospero embodies the compassionate and forgiving at the end because he has succeeded in life by understand the two most important virtues in life. Macbeth does not achieve anything but grief throughout the play and he consistently thinks about himself too much to consider other human beings. With both characters, along with the many others in both plays, Shakespeare has beautifully illustrated humanity for us on what was once a plain canvas. I do forgive thee, Unnatural though thou art. Their understanding Begins to swell, and the approaching tide Will shortly fill the reasonable shore That now lies foul and muddy. (Shakespeare The Tempest 5.1. ...read more.