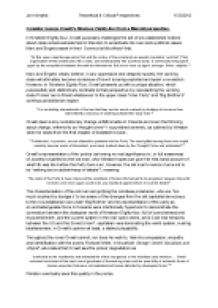 ﻿Jon Kinsella Theoretical & Critical Perspectives 15/2/2012 Consider George Orwell?s Nineteen Eighty-four from a Marxist perspective. In Nineteen Eighty-four, Orwell purposely challenges the set of pre-established notions about class consciousness held in Marxism to accentuate his own socio-political values. Marx and Engels assert in their Communist Manifesto1 that, ?Its [the upper class/bourgeoisie?s] fall and the victory of the proletariat are equally inevitable? and that ?[The] organisation of the proletarians into a class, and consequently into a political party, is continually being upset again by the competition between the workers themselves. But it ever rises up again, stronger, firmer, mightier.?2 Marx and Engels? clearly believe, in any oppressive and despotic society, the working class will ultimately become conscious of how it is being exploited and spark a revolution. However, in Nineteen Eighty-Four, Orwell presents us with a unique situation, which purposefully and distinctively contrasts to that perspective by representing the working class ?Proles? as no threat whatsoever to the upper class ?Inner Party? and ?Big Brother?s? continuous totalitarian regime. ?It is an abiding characteristic of the low that they are too much crushed by drudgery to be more than intermittently conscious of anything outside their daily lives.?3 Orwell deems any revolutionary change unfathomable in Oceania and even the thinking about change, referred to as ?thought crime?4, is punished severely, as outlined by Winston when he reads from the first chapter of Goldstein?s book, "Proletarians, in practice, are not allowed to graduate into the Party. The most gifted among them, who might possibly become nuclei of discontent, are simply marked down by the Thought Police and eliminated."5 Orwell?s representation of the ?proles? as having no real significance in, or full awareness of, society is typified by the old man, who Winston hopes can give him first-hand account of what life was like before the Party took over. However, the old man?s memory turns out to be ?nothing but a rubbish-heap of details?6, meaning ?the claim of the Party to have improved the conditions of human ...read more.

All others classes, including the bourgeoisie, are limited to a "false consciousness" which impedes them from understanding the totality of history: instead of understanding each specific moment as a portion of a supposedly deterministic historical process, they universalize it and believe it is everlasting. Hence, capitalism is not thought as a specific phase of history, but is naturalized and thought of as an eternal solidified part of history. Says Lukács, this "false consciousness", which forms ideology itself, is not a simple error as in classical philosophy, but an illusion which can't be dispelled.[ “the power of holding two contradictory beliefs in one’s mind simultaneously, and accepting both of them.” After the revolutionary period of the fifties and sixties, society regrouped itself, as always, into High, Middle, and Low. But the new High group, unlike all its forerunners, did not act upon instinct but knew what was needed to safeguard its position. It had long been realized that the only secure basis for oligarchy is collectivism. Wealth and privilege are most easily defended when they are possessed jointly. The so-called 'abolition of private property' which took place in the middle years of the century meant, in effect, the concentration of property in far fewer hands than before: but with this difference, that the new owners were a group instead of a mass of individuals. Individually, no member of the Party owns anything, except petty personal belongings. Collectively, the Party owns everything in Oceania, because it controls everything, and disposes of the products as it thinks fit. In the years following the Revolution it was able to step into this commanding position almost unopposed, because the whole process was represented as an act of collectivization. It had always been assumed that if the capitalist class were expropriated, Socialism must follow: and unquestionably the capitalists had been expropriated. Factories, mines, land, houses, transport -- everything had been taken away from them: and since these things were no longer private property, it followed that they must be public property. ...read more.

was based on Glenn Miller's 1939 song of the same name ("Under the spreading chestnut tree, Where I knelt upon my knee, We were as happy as could be, 'Neath the spreading chestnut tree.") The song has its origins in the 1920s, when it was a camp song, sung with corresponding movements (like touching your chest when you sing "chest", and touching your head when you sing "nut"). The original title was ?Go no more a-rushing?. Under these lyrics, the song was published as early as 1891.[47] The "Hates" (two-minutes hate and hate week) were inspired by the constant rallies sponsored by party organs throughout the Stalinist period. These were often short pep-talks given to workers before their shifts began (two minutes hate), but could also last for days, as in the annual celebrations of the anniversary of the October revolution (hate week). The contractions of words, in which "Ministry of Truth" was shortened to "Minitrue" and "English Socialism" to "Ingsoc" was inspired by the Soviet habit of combining words. Smert Shpionam ("death to spies", a sub-division of the NKVD) was shortened to "Smersh". Dialectical Materialism was similarly shortened to "DiaMat", and The Communist International was referred to as the Comintern. "Vaporizing" criminals (a metaphor for execution) is based on the Soviet word "liquidation" a vague term that usually meant execution or "Internal Exile" to the gulag labour camps. Doublethink, a system of thought that allowed people to believe two contradictory things simultaneously (the chocolate ration is cut to 20 grams and the chocolate ration is raised to 20 grams), is a literary re-working of Marxist-Leninist Dialectics, whose "laws" of the "unity of opposites" and "negation of the negation" allow a person to hold two different opinions in two different contexts. Marxist dialectics encourages its adherents to see the merits of theses and antitheses standing behind behind historical and political processes, allowing agreement with contradictory statements (The appearance of capitalism was a good thing, because it meant the end of feudalism. The end of capitalism is a good thing, because it ushers in the era of socialism). ...read more.