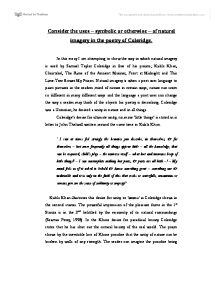 Consider the uses - symbolic or otherwise - of natural imagery in the poetry of Coleridge.

Consider the uses - symbolic or otherwise - of natural imagery in the poetry of Coleridge. In this essay I am attempting to show the way in which natural imagery is used by Samuel Taylor Coleridge in five of his poems; Kubla Khan, Christabel, The Rime of the Ancient Mariner, Frost at Midnight and This Lime-Tree Bower My Prison. Natural imagery is when a poet uses language to paint pictures in the readers mind of nature in certain ways, nature can seem so different in many different ways and the language a poet uses can change the way a reader may think of the objects his poetry is describing. Coleridge was a Unitarian; he desired a unity in nature and in all things. Coleridge's desire for ultimate unity, no more 'little things' is stated in is letter to John Thelwall written around the same time as Kubla Khan. ' I can at times feel strongly the beauties you describe, in themselves, & for themselves - but more frequently all things appear little - all the knowledge, that can be acquired, child's play - the universe itself - what but and immense heap of little things? - I can contemplate nothing but parts, & parts are all little -! - My mind feels as if it ached to behold & know something great - something one & indivisible and it is only in the faith of this that rocks or waterfalls, mountains or caverns give me the sense of sublimity or majesty!' Kubla Khan illustrates this desire for unity or 'oneness' as Coleridge shows in the second stanza. The powerful impression of the pleasure dome in the 1st Stanza is in the 2nd belittled by the enormity of its natural surroundings (Seamus Perry, 1998). In the Khans desire for paradisial beauty Coleridge states that he has shut out the natural beauty of the real world. ...read more.

This description uses the nature to show how strong the bond between these two men was, it goes on to demonstrate the distance between them but nothing could destroy the friendship they once had again using a metaphor of nature, 'A dreary sea now flows between, But neither hear, nor frost, nor thunder Shall wholly do away, I ween, The marks of that which once hath been.' Nearing the end of the poem there seems to be a lot of serpentine imagery, now the reader is sure of Geraldine's supernaturalism and malice, the snake is a symbol of evil. Twice in part 2 is there reference to hissing, both times coming for Christabel, she does not trust or like Geraldine at this point, but the idea of Christabel as the serpent is quite out of character as it is traditionally the already evil character in a story playing the part of the serpent. Although serpentine features are found on both young ladies Christabel in her hissing and the emphasis on Geraldine's eyes turning snakelike in lines 573 and 590. A snake also features in the dream that Geraldine tells Sir Leoline she had, this dream seems to illustrate the control Geraldine feels she has over Christabel; 'That gentle bird whom thou dost love And call'st by thy own daughters name -... When lo! I saw a bright green snake Coiled around its wings and neck.' Geraldine is the snake coiling itself around the dove, Christabel. The poem Christabel is unfortunately incomplete; we shall never know how it was to end. The Rime of the Ancient Mariner begins with emphasis on describing the ancient mariner, 'By thy long grey beard and glittering eye' The poem holds onto the description emphasising the eyes; 'The bright-eyed mariner' The mariner begins the story of his journey, the birdlike imagery begins when the storm is described like a bird; 'He struck with his o'ertaking wings And chased us south along.' ...read more.

friend Charles Lamb and says that he should be the most glad at these beautiful sights of nature, having been in the city so long. 'In gladness all - but thou methinks, most glad, My gentle-hearted Charles! For thou hast pined And hungered after nature many a year In the great city pent, winning thy way.' Coleridge takes his time and uses every inch of beautiful imagery he can muster up to describe this sunset, he is obviously imagining the most beautiful sunset he has ever seen and is putting down into words how beautiful it really is. 'Ah, slowly sink Behind the western ridge, thou glorious sun! Shine in the slant beams of the sinking orb, Ye purple heath flowers! Richlier burn, ye clouds! Live in the yellow light, ye distant groves! And kindle, thou blue ocean!' Coleridge now notices that there is beauty all around him in his little lime-tree bower, he has not missed out on beauty at all, he has not seen the same things as his friends but he has seen just as much beauty as they have and he has experienced the same sunset as them. 'This little lime-tree bower, have I not marked Much that has soothed me. Pale beneath the blaze Hung the transparent foliage; and I watched Some broad and sunny leaf, and loved to see The shadow of the leaf and stem above Dappling its sunshine! Coleridge realises the nature is everywhere and just because he didn't join his friends on their walk he was still surrounded by nature. Just because he cannot share his joy at the beauty around him and he could not share Charles's joy does not make the joy any less. In conclusion Coleridge uses natural imagery to great affect in these poems some more than others, Coleridge has used natural imagery to give a sense of beauty as in 'Frost at Midnight' and 'This Lime-Tree Bower My Prison' or a sense of evil as in 'Christabel' and 'Kubla Khan'. ...read more.