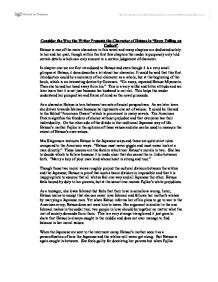 Consider the Way the Writer Presents the Character of Hatsue in &amp;#147;Snow Falling on Cedars&amp;#148;

Consider the Way the Writer Presents the Character of Hatsue in "Snow Falling on Cedars" Hatsue is one of the main characters in this novel and many chapters are dedicated solely to her and her past, though within the first few chapters the reader is purposely only told certain details which can only amount to a certain judgement of character. In chapter one we are first introduced to Hatsue and even though it is a very small glimpse at Hatsue, it does describe a lot about her character. It could be said that this first introduction could be a summary of her character as a whole, but at the beginning of the book, which is an interesting device by Guterson. "Go away, repeated Hatsue Miyamoto. Then she turned her head away from his." This is a very wilful and bitter attitude and we later learn that it is not just because her husband is on trial. ...read more.

"Marry a boy of your own kind whose heart is strong and true." Though these two moral views roughly project the cultural division between the whites and the Japanese, Hatsue is proof that such a basic division is impossible and that it is inappropriate to assume that all whites feel one way and all Japanese the other. Hatsue feels bound by duty to her parents, but at the same time resents Fujiko's white prejudices. As a teenager, she loves Ishmael but feels that their love is somehow wrong. Later, Hatsue learns to accept that she can never love Ishmael and follows her mother's wishes by marrying a Japanese man. Yet when Kabuo informs her of his plans to go to war in the American army, Hatsue does not want him to leave. Her argument is similar to the one Ishmael makes in the cedar tree: two people in love should be together no matter what the rest of society demands from them. ...read more.

She makes her choice when Ishmael tries to have s*x with her; she pushes him away and blocks him out, both mentally and physically. When she is in the interment camp Hatsue terminates her relationship with Ishmael and brings herself closer to her family. She had felt all along that the relationship was wrong and is now glad to be completely honest with her mother. And her meeting with Kabuo, even though under strange circumstances strengthens her because she now has a better tie with the Japan she has chosen to accept, rather than the Hakujin way. Hatsue always seems to have to chose between the two cultures in all of her life. Guterson, possibly could have used her to highlight the difficulties that r****m and prejudice inflict on people. Also it is open to debate whether Guterson has used her to show that it is always best to stick to ones own background. The role of Hatsue is certainly important but it is up to the reader to designate her purpose. ...read more.