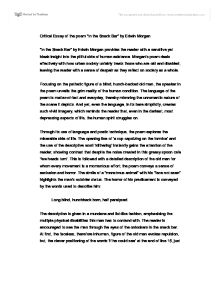 Critical Essay of 'In the Snack Bar

Critical Essay of the poem "In the Snack Bar" by Edwin Morgan "In the Snack Bar" by Edwin Morgan provides the reader with a sensitive yet bleak insight into the pitiful side of human existence. Morgan's poem deals effectively with how urban society unfairly treats those who are old and disabled, leaving the reader with a sense of despair as they reflect on society as a whole. Focusing on the pathetic figure of a blind, hunch-backed old man, the speaker in the poem unveils the grim reality of the human condition. The language of the poem is matter-of-fact and everyday, thereby mirroring the unromantic nature of the scene it depicts. And yet, even the language, in its bare simplicity, creates such vivid imagery, which reminds the reader that, even in the darkest, most depressing aspects of life, the human spirit struggles on. Through its use of language and poetic technique, the poem explores the miserable side of life. The opening line of 'a cup capsizing on the formica' and the use of the descriptive word 'slithering' instantly gains the attention of the reader, showing contrast that despite the noise created in this greasy spoon cafe 'few heads turn'. ...read more.

Perhaps one of the strongest messages that come across in the poem is the fact that our choices as human beings are limited by our circumstances. When the speaker helps the man to the toilet, the old man attempts to harness some control by instructing his helper: I take his arm. 'Give me-your arm - it's better,' he says. In this way, he retains a sense of control over his life and the person that he must rely on. The trip to and from the toilet is, in itself, an achievement. The reader is confronted with the hazardous world of someone who is blind and disabled. The clear vision that is often taken for granted is stripped away and the reader, like the old man, must negotiate the dangers of the everyday world. Suddenly, even the most mundane items, "crunch of spilt sugar, slidy puddle from the night's umbrellas, table edges, people's feet", take on greater significance. The imagery this creates is excellent as sounds and smells come to the fore as they are louder, more vivid, to the blind man. Although the speaker is neither blind, nor disabled, the poem conveys a sense that the speaker empasises strongly with the old man. ...read more.

But he cannot reckon up the chances, having one thing to do, to haul his blind hump through these rains of August. The impact this creates on the reader is a stark and depressing one. Not only does it underline the misery of just one individual, it also accuses those who "would evade him" as if he carries a curse around with him to taint those who come into contact with him. However, there is an underlying sense that the evasion and the man's solitariness is due to the fact that he is too strong a reminder of the fate that could befall any one of us, and the ultimate fate that we are all destined for - death. Edwin Morgan's poem is stating a clear message about the darker side of humanity, as suggested at the beginning of the essay makes a strong moral statement about the nature of humans being self-centred and uncaring, he does this by focusing on the treatment of this old blind man and his daily struggle. The poem's real strength is Morgan's use of imagery, the impact the vivid imagery left on me as the reader is one of great sadness as it reflects a side of life you try to avoid thinking about. ...read more.