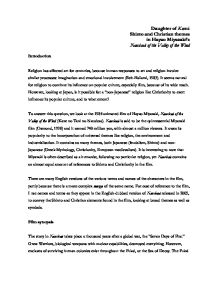 Daughter of Kami: Shinto and Christian themes in 'Nausica of the Valley of the Wind'

Daughter of Kami: Shinto and Christian themes in Hayao Miyazaki's Nausica� of the Valley of the Wind Introduction Religion has affected art for centuries, because human responses to art and religion involve similar processes: imagination and emotional involvement (Beit-Hallami, 1983). It seems natural for religion to continue its influence on popular culture, especially film, because of its wide reach. However, looking at Japan, is it possible for a "non-Japanese" religion like Christianity to exert influence its popular culture, and to what extent? To answer this question, we look at the 1984 animated film of Hayao Miyazaki, Nausica� of the Valley of the Wind (Kaze no Tani no Nausicaa). Nausica� is said to be the quintessential Miyazaki film (Osmond, 1998) and it earned 740 million yen, with almost a million viewers. It owes its popularity to the incorporation of universal themes like religion, the environment and industrialisation. It contains so many themes, both Japanese (feudalism, Shinto) and non-Japanese (Greek Mythology, Christianity, European medievalism). It is interesting to note that Miyazaki is often described as a humanist, following no particular religion, yet Nausica� contains an almost equal amount of references to Shinto and Christianity in the film. There are many English versions of the various terms and names of the characters in the film, partly because there is a more complex manga of the same name. ...read more.

Embellished with vivid music, an image of a nature revered for its sacredness and perfection is projected. Reverence for nature also comes from seeing it as sacred, and from knowing its power. In the film, humans fear the lethal spores of the Fukai, and its constant spread. At the same time, as the viewer discovers later on, the Fukai actually has restorative powers. It is in fact cleansing the Earth of mankind's waste left behind from the Great War. Similarly, the Ohmu possess benevolent telepathic powers (although they can only communicate with Nausica�) as well as the power to destroy humans and civilisation. In another scene, Kushana, commander of the Tolmekian army, announces her plan to burn the Fukai. In response, the Valley people exclaim in hushed tones, "Burn the Toxic Jungle?", "Is it possible?" showing that they consider the Fukai indestructible. These powers of the Fukai and the Ohmu cause humans to fear and respect nature at the same time. Nausica� reveres the life of both humans and insects. She implores countless times to the warring Pejites and Tolmekians, "Please, no more killing!" and "I can't bear to have anyone else die". Instead of killing insects that attack humans, she uses an insect charm to calm them down and coax them back to the jungle. ...read more.

and surrender (she put herself at the Pejites' mercy). In trying to save her people from an attack by the Ohmus, Nausica� is shot twice, burned by acid and finally dies facing the Ohmu stampede. The Ohmus, however, revived Nausica�. Her death and resurrection mirrors that of Jesus' after his death and burial. At the end of the film, a chiko plant grows in the pure sand in the Fukai, symbolising the resurrection of nature at last. We see that it is not only Nausica�, but also nature, that is brought back to life. Conclusion In this essay, we have seen that Christianity can indeed influence a Japanese anime, however, the Shinto elements in Nausica� are far more extensive. The Shinto themes mainly stress mankind's relationship with nature while the Christian themes focus on mankind's destiny. Apparently Miyazaki did not intend to have such religious overtones in Nausica�. However, in the spirit of symbolic interactionism, these religious themes nevertheless have meaning for those who ascribe meanings to them. Viewers (like me) interpret the images and scenes in the film and make sense of them in different frameworks, such as religion. Did Nausica� manage to truly unite mankind with nature? Perhaps through the medium of popular cultures, she serves as a "female Japanese prophet" to remind us to strive towards peace and harmony with nature and mankind. ...read more.