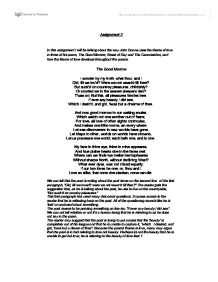 Describe three poems by John Donne the theme of love

Assignment 2 In this assignment I will be talking about the way John Donne uses the theme of love in three of his poem, The Good Morrow, Break of Day and The Canonization, and how the theme of love develops throughout the poems. The Good Morrow I wonder by my troth, what thou, and I Did, till we lov'd? Were we not wean'd till then? But suck'd on countrey pleasures, childishly? Or snorted we in the seaven sleepers den? T'was so; But this, all pleasures fancies bee. If ever any beauty I did see, Which I desir'd, and got, 'twas but a dreame of thee. And now good morrow to our waking soules, Which watch not one another out of feare; For love, all love of other sights controules, And makes one little roome, an every where. Let sea-discoverers to new worlds have gone, Let Maps to other, worlds on worlds have showne, Let us possesse one world; each hath one, and is one. My face in thine eye, thine in mine appeares, And true plaine hearts doe in the faces rest, Where can we finde two better hemispheares Without sharpe North, without declining West? What ever dyes, was not mixed equally; If our two loves be one, or, thou and I Love so alike, that none doe slacken, none can die. ...read more.

Although it was dark, love brought them together therefore whether light or not they should stay together. Some may interpret this in another way; they had s****l intercourse during the night so they can also have s*x during the day. The poet has used metaphors to begin the second paragraph, "light hath not tongue, but is all eye". The poet is trying to say that the sun can not talk but it can see. "If it could speak as well as spy", the poet is attempting to say that only if the sun could speak as well as it sees. Some may argue that from here we find that the poet is talking about a gay relationship as there is no female figure but a male one, "him". If this were the case then some would believe that line 9, "This were the worst day it could say", means that it were a sin to have a gay relationship at the time and he wanted no one to know. We strengthen the idea that this is about a gay relationship on line 12, "That I would not from him, that had them, go". The first two lines of the final paragraph may be speaking s******y perhaps of prostitution, "Must business thee from hence remove? ...read more.

The poet tells the other figure to "Call us what you will," for it is love that makes them so. He says that the other figure can "Call her one, me another fly," and that they are also like candles, "tapers", which burn by feeding upon their own selves, "and at our own cost die". In each other, the lovers find the eagle and the dove, and together, "we two being one", they illuminate the riddle of the phoenix, they "die and rise the same," just as the phoenix does. Although unlike the phoenix, it is love that slays and resurrects them. He says that they can die by love if they are not able to live by it, and that if their legend is not fit "for tombs and hearse," it will be fit for poetry, and "We'll build in sonnets pretty rooms." The poet says that a well-wrought urn does as much justice to a dead man's ashes as a gigantic tomb, "As well a well-wrought urn becomes The greatest ashes, as half-acre tombs" By this the poems about the poet and his lover will cause them to be "canonized," admitted to love. All those who hear their story will invoke the lovers, saying that countries, towns, and courts "beg from above A pattern of your love!" The poet has used many spiritual words such as "mysterious", " hymn", "canonized", "reverend" and "hermitage" as imagery suggesting that love is spiritual. ...read more.