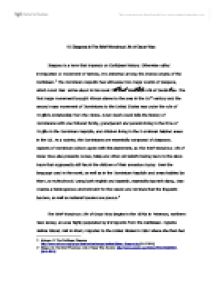 10. Diaspora in The Brief Wondrous Life of Oscar Wao Diaspora is a term that impends on Caribbean history. Otherwise called immigration or movement of nations, it is entwined among the diverse origins of the Caribbean.1 The Dominican Republic has witnessed two major events of diaspora, which Junot Diaz writes about in his novel The Brief Wondrous Life of Oscar Wao. The first major movement brought African slaves to the area in the 16th century and the second mass movement of Dominicans to the United States was under the rule of Trujillo's dictatorship from the 1930s. Junot Diaz's novel tells the history of Dominicans with one fictional family, grandparent and parents living in the time of Trujillo in the Dominican Republic, and children living in the Dominican habited areas in the US. As a society, the Dominicans are essentially composed of diasporas. Aspects of Dominican culture agree with this statement, as The Brief Wondrous Life of Oscar Wao also presents curses, f*k�, and other old beliefs tracing back to the slave trade that supposedly still haunt the children of their ancestors today. Even the language used in the novel, as well as in the Dominican Republic and areas habited by them, is multicultural. Using both English and Spanish, especially Spanish slang, Diaz creates a heterogenous environment for the reader and reminds that the linguistic borders, as ...read more.

She has never witnessed diaspora first hand, and is a part of Beli's and the children's lives when they visit the Dominican Republic. Beli, being a stubborn, strong headed woman, avoids visiting her home country because of the bad memories. Forced to migrate to the States in the first place, she surprisingly made it a home for her and her children. Dominican diaspora, as it is presented in the lives of the de Leon family, is cursed with f*k�, "the Curse and Doom of the New World"6 that haunts the family. The curse was set upon the family ever since Beli's father committed treason against Trujillo, by not handing his daughter over to him. f*k�, according to Diaz has transformed into a power, a source of misfortune that lived on even after Trujillo's reign was over. Beli's whole family except for her aunt, La Inca dies in odd accidents, and Beli was sold to be a servant. Even though Beli moves in with her aunt and lives a relatively happy youth, f*k� follows her and she is almost killed for getting pregnant to a gangster that was married to Trujillo's sister. After the incident she is forced to leave the Dominican Republic, but to have the curse follow her. ...read more.

Oscar Wao gives the reader a shattered history lesson, with the often sarcastic footnotes and the chapters of Abelard and Beli, which reflect the atrocities better than past immigrant narratives. Diaz purposefully creates a collage of references and stories that give insight on the modern, multicultural world, which can be only presented through a mixed up, incoherent narrative.10 Language is easily used to define social class, and immigrants are often seen as lower class, as their language is considered as a lower form of communication. This is not only seen in the new country of immigration, for example "Spanglish" slang created in the Dominican areas, but also the country of origin. Especially the Dominicans have been victims of colonization, and having to create a new identity, they create a form of language with it. Diaz uses the language of the immigrants to write a story about the immigrants, as it maintains their story and culture without trying to Americanize it. This does not make the novel an easy read but it forces the reader to make sense out of the reality these immigrants face. Diaz writes about all genres of literature and art after another, eliminating all prejudice about art being either low or high class. "Cicero, Stan Lee, The Sound of Music, and Spanish slang are all written into the same sections, without privileging one over another", states Max Abrams. ...read more.