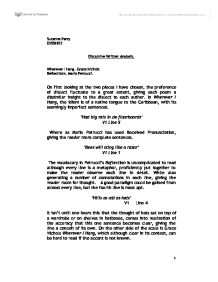 Discursive Written Analysis of Wherever I Hang by Grace Nichols and Reflections by Mario Petrucci.

Suzanne Parry 03056922 Discursive Written Analysis. Wherever I Hang. Grace Nichols Reflections. Mario Petrucci. On first looking at the two pieces I have chosen, the preference of dialect fluctuate to a great extent, giving each poem a dissimilar insight to the dialect to each author. In Wherever I Hang, the idiom is of a native tongue to the Caribbean, with its seemingly imperfect sentences. 'Had big rats in de floorboards' V1 Line 5 Where as Mario Petrucci has used Received Pronunciation, giving the reader more complete sentences. 'Bees will sting like a razor' V1 Line 1 The vocabulary in Petrucci's Reflection is uncomplicated to read although every line is a metaphor, proficiently put together to make the reader observe each line in detail. While also generating a number of connotations in each line, giving the reader room for thought. A good paradigm could be gained from almost every line, but the fourth line is most apt. 'Hills as old as hats' V1 Line 4 It isn't until one hears this that the thought of hats sat on top of a wardrobe or on shelves in hatboxes, comes into realization of the accuracy that this one sentence becomes clear, giving the line a conceit of its own. On the other side of the scale is Grace Nichols Wherever I Hang, which although clear in its context, can be hard to read if the accent is not known. ...read more.

Nichols gives us a representation of the life she is leaving, with 'de sun' and 'de humming-bird spendour' giving the reader a image of hot happy days, where as Petrucci's verse is more a reminder of things that are responsibilities to most people. 'A nut, tough as a tax form'. The two poems contrast each other with the life they portray, until fifth line in verse two of Wherever I Hang. 'I begin to change my calypso ways' V 2 Line 5 Here is the change in the poem, from the leaving of a home to come to what the writer has considered a dream country. This is the point that the author starts to become like the people in the land she now lives and take on their lifestyle. But this is also where the writer looses a lot of her homeland traditions and the divide starts. Nichols gives the reader different time spans but has written the whole piece in present tense. The effect this gives is the reader embarking on a journey through the poem with the writer. With her use of a metaphor 'They solid to de seam', an alliteration on the 'p', 'people pouring' and a simile 'Like beans', Nichols is pushing the reader to realize how different this feels to someone who has never felt or seen things like this. ...read more.

V4 Line 1 This is not the first time Petrucci mentions people in his poem. 'Clockwork regular as citizens' V2 Line3 This line gives the reader the picture of people rushing to work or where ever in the rat race, which could be joined with the same line, giving it an ambiguous meaning. The rat race could be also taken as mice, as they are from the rat family. The mice could be also meaning from the nursery rhyme hickory dickory dock, and the mouse that ran up the clock. In the second verse of Nichols 'Wherever I Hang', we are given a high level of co- ordination with 'And is so' used in three lines, almost to show the reader that the change in the writers ways in inevitable. The dialect that is used in this second verse has changed to some extent to what is considered more English with the word 'I' instead of 'me', which is continually used in the first verse. Although the Caribbean word use is still present with the occasional use of 'me' and 'de'. 'And waiting me turn in queue' V2 Line 8 The sentences are more complete in this verse, rather than 'At first I feeling like I in dream', (V1 Line 8) the writer is using more English dialect than her native dialect, 'I begin to change my calypso ways' (V2 Line 5). The whole of Nichols poem has many personal pronouns, unlike Petrucci's, which has no personal pronouns at all. ?? ?? ?? ?? 1 ...read more.