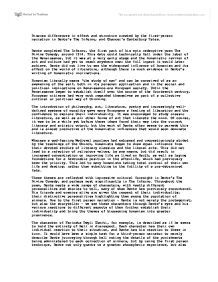 Discuss differences in effect and structure created by the first-person narration in Dante's The Inferno, and Chaucer's Canterbury Tales.

Discuss differences in effect and structure created by the first-person narration in Dante's The Inferno, and Chaucer's Canterbury Tales. Dante completed The Inferno, the first part of his epic redemptive poem The Divine Comedy, around 1314. This date could technically fall under the label of the Renaissance, but it was at a very early stage and the humanistic revival of art and culture had yet to reach anywhere near the full impact it would later achieve. Dante did not live to see the widespread influence of humanism and its effect on the world of literature, although there is much evidence in Dante's writing of humanistic inclinations. Humanism literally means 'the study of man' and can be conceived of as an awakening of the self, both in its personal application and in the social and political implications on Renaissance-era European society. Until the Renaissance began to establish itself over the course of the fourteenth century, European citizens had very much regarded themselves as part of a collective cultural or political way of thinking. The introduction of philosophy, art, literature, poetry and increasingly well-defined systems of morality gave many Europeans a feeling of liberation and the confidence to explore their individuality. It was encouraged to study classic literature, as well as all other forms of art that liberate the mind. ...read more.

Dante faints with grief in the second circle of h**l, only to awake in the third. There is no need to explain this transportation, as we are seeing only what Dante sees and have only the same information at our disposal as Dante is able to gather while conscious. Before Dante, there was Chaucer, who showed no such concessions to the evolution of humanism. His medieval tales do not break stylistic or linguistic boundaries, but rather work with the traditional literary techniques of the day to create a world inhabited by colourful yet less three-dimensional characters than those who later evolved in the works of Dante and beyond. It is my belief that the first-person narration performs an entirely different function in this case, than the realism and atmosphere invoked from Dante's believable interactions. Each of Chaucer's characters has a tale to tell. It is not always their own tale, but it is the tale which they are telling, and through which they present themselves. For they are presenting themselves, rather than merely being presented by Chaucer. But they are not only addressing the anonymous potential audience of Chaucer's future readership, but their companions on the pilgrimage. They speak to us as well as them, often revealing more about themselves that they seem to realise. ...read more.

He uses the technique to have his characters paint an often unintentionally but unmistakably honest portrait of his characters as revealed in their own voice. His characters are, for the most part, far from heroic, and Dante does himself no such injustices while narrating The Inferno. In conclusion, it can be seen that Dante and Chaucer choose to employ first person narration for vastly different reasons. In the case of The Inferno, this perspective is ideal for the introduction of humanistic literary techniques and an increase in the importance of individual characterisation above role and gender stereotypes. It also increases the elements of adventure, as we are very close to Dante and the unfolding events. Ultimately, it serves to heighten the solo hope and futility of his epic quest (although not travelling alone, his destination is ultimately a personal one), while enriching the journey with the detail of characterisation and the characterisation of personally perceived detail. Chaucer, on the other hand, has far more mischievous motivations, and employs the first person perspective throughout his many tales in order that the characters get a fair chance to present themselves and that we get a fair chance to judge them. He relishes the fact that, given enough rope, they will inevitably satirise themselves to a degree that cannot be argued with. ...read more.