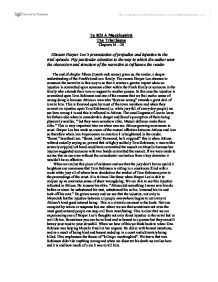 Discuss Harper Lee's presentation of prejudice and injustice in the trial episode. Pay particular attention to the way in which the author uses the characters and structure of the narrative to influence the reader.

To Kill A Mockingbird The Trial Scene Chapters 16 - 20 Discuss Harper Lee's presentation of prejudice and injustice in the trial episode. Pay particular attention to the way in which the author uses the characters and structure of the narrative to influence the reader. The end of chapter fifteen (Lynch mob scene) gives us, the reader, a deeper understanding of the Finch's bond as a family. The reason Harper Lee chooses to construct the narrative in this way is so that it creates a greater impact when an injustice is committed upon someone either within the Finch family or someone in the family who extends their love or support to another person. In this case the injustice is committed upon Tom Robinson and one of the reasons that we feel such a sense of wrong doing is because Atticus a man who "does no wrong" extends a great deal of love to him. This is frowned upon by most of the town members and when they commit an injustice upon Tom Robinson (i.e. white jury full of every day people) we see how wrong it is and this is reflected in Atticus. ...read more.

Another way that Harper Lee builds suspense is by exploiting Atticus' ignorance. When the courtroom begins to assemble Reverend Sykes tries to get Jem to usher Scout home. Jem tries to persuade Dill to go home with his sister. Scout then tells Jem that he would have to take her because Atticus had said so. Jem wraps matters up by telling Reverend Sykes that Scout couldn't understand what was happening. From this point the reader is aware that Atticus' children are in the stands with the coloured folks. Atticus is unaware of this and we as a reader have an advantage over him. We are also curious as to how he would react if his children were presented to him. When the children are introduced later on they provoke an uneasy reaction from Atticus. After Calpurnia handed him a note saying the children had been missing all day he tells the judge if he can leave at which point the children descend from the stands. His immediate reaction is one of relief we share his relief, as we no longer know something that he doesn't. Atticus is such a good-natured person that when we have an unfair advantage over him we are discontent and relieved when the knowledge is equally shared. ...read more.

We feel he is not only crying because he feels genuinely upset for Tom Robinson but he is also crying because of the unnatural cruelty that he suffers. This would never happen to a white person and Dill cannot understand why treated differently. A concept that Harper Lee enforces throughout the book. Why should all black people be treated differently just because their skin is a different colour? Atticus' behaviour and attitude in the court is constructed in such a way that it effortlessly belittles Bob Ewell. He questions his ability to write and his ability to hold up a decent conversation. His language is very sophisticated and Atticus is able to reveal to the court, judge and jury that it was in fact Mayella's father who committed the r**e without actually saying so until the verdict is being given. "Did you think the nature of her (Mayella) injuries wanted immediate medical attention?" Bob Ewell replied with "what?" letting us firstly know that the question had struck a nerve and secondly that they should have been Bob's intentions. Atticus remains genuinely polite and not being sarcastic at any time. In one way this highlights a direct contrast between the Finch family and the Ewells, which is made obvious to the reader. ...read more.