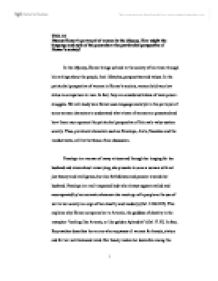 Discuss Homer's portrayal of women in the Odyssey. How might the language and style of the poem show the patriarchal perspective of Homer's society?

TMA 04 Discuss Homer's portrayal of women in the Odyssey. How might the language and style of the poem show the patriarchal perspective of Homer's society? In the Odyssey, Homer brings us back to the society of his times through his writings about the people, their lifestyles, perspectives and values. In the patriarchal perspective of women in Homer's society, women hold very low status in comparison to men. In fact, they are considered tokens of male power-struggles. We will study how Homer uses language and style in the portrayal of some women characters to understand what views of women are presented and how these may represent the patriarchal perspective of this male value-system society. Thus, prominent characters such as Penelope, Arete, Nausikaa and the maidservants, will be the focus of our discussion. Penelope is a woman of many virtues and through her longing for her husband and views about remarrying, she presents to us as a woman with not just beauty and intelligence, but also faithfulness and passion towards her husband. Penelope is a well-respected lady who always appears veiled and accompanied by her servants whenever she meets up with people as the use of veil in her society is a sign of her chastity and modesty (Od. 1.328-335). This explains why Homer compares her to Artemis, the goddess of chastity in the metaphor "looking like Artemis, or like golden Aphrodite" (Od. ...read more.

Through the suitors' bride-gifts, in terms of dowry, as well as a gift-contest, Homer is suggesting that the patriarchal perspective of a woman's value in the society is nothing but an object or 'currency' by which men are defining their deal (Od. 18.275-280). Penelope definitely does not conform to the pressures of her society. This matches the epithet 'circumspect', since Penelope is one who does not compromise her stand. This distinct character in her makes her different from other women whose fate lies in the hands of the men. Penelope's concerns and love towards her son is typical of every mother in the society. Although Penelope is served by many maids, she does not leave the upbringing of her child to them, but raises him up by herself. This mother-child relationship encompasses not just respect and love, but also forgiveness over all misunderstandings and anger. This is seen when Penelope forgives Telemachos for leaving her secretly in search for Odysseus (Od. 17.36-48). This love Penelope which showers upon her family matches the metaphor "shining among women" since she is outstanding not just in her virtues, beauty and love for her husband, but also as a caring and affectionate mother (Od. 23.302). This shows us that while a woman's status in the Homeric society is defined very much in terms of their relationship to men, Penelope is one who earns the respect worthy of her own beliefs and virtues. ...read more.

These serving maids do the household chores and serve their masters and their guests. In the society, to serve with loyalty to their masters is important. From the example of the maids in Odysseus' household, they are put to death because they slept with the suitors (Od. 20.7). This is why Homer uses the epithet 'faithless maids' to describe them as they have betrayed what the society deemed as loyalty. Even when one of the maids was rude to the vagabond, Penelope gave her a hard scolding, using the words 'bold and shameless b***h' on her (Od. 19.90-92). In the society, maids hold one of the lowest ranks in status for women and it is a job which only the poor will work for since their fate will lie at the hands of their masters. Indeed, Homer intelligently uses special features in his language and style in the presentation of women through the examples of Penelope, Nausikaa, Arete and the maids. Having studied the use of epithets, similes and metaphors on these women, we have a better picture of where women stand in society as well as the value placed on them. Some of the evidences do represent the patriarchal perspectives of women by the society while some do not, as seen from the discussion above. Through studying Homer's use of language and style in the portrayal of women in the Odyssey, it has remarkably enriched our understanding of how they reflected the attitudes of his society with regards to women. ...read more.