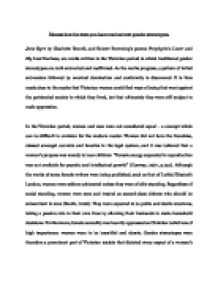 Discuss how &quot;Jane Eyre&quot; and the works of Robert Browning subvert gender stereotypes.

Discuss how the texts you have read subvert gender stereotypes. Jane Eyre by Charlotte Bront�, and Robert Browning's poems Porphyria's Lover and My Last Duchess, are works written in the Victorian period in which traditional gender stereotypes are both subverted and reaffirmed. As the works progress, a pattern of initial subversion followed by eventual domination and conformity is discovered. It is thus made clear to the reader that Victorian women could find ways of being that went against the patriarchal society in which they lived, but that ultimately they were still subject to male oppression. In the Victorian period, women and men were not considered equal - a concept which can be difficult to envision for the modern reader. Women did not have the franchise, classed amongst convicts and lunatics in the legal system, and it was believed that a woman's purpose was merely to bear children: "Female energy expended in reproduction was not available for psychic and intellectual growth" (Conway, 1972, p.140). Although the works of some female writers were being published, such as that of Letitia Elizabeth Landon, women were seldom celebrated unless they were of elite standing. Regardless of social standing, women were seen and treated as second-class citizens who should be subservient to men (Booth, 2006). They were expected to be polite and docile creatures, taking a passive role in their own lives by allowing their husbands to make household decisions. ...read more.

Here, it is clear that Jane shows some reluctant to marry Mr. Rochester as she would be under his control, and her "property" would be his. Bront�'s use of constraining words and Jane's recognition that Mr. Rochester wrote out her name cards as opposed to letting her do this herself emphasises this doubt in her mind. The fact that Jane chooses to leave Mr. Rochester is in direct contradiction to traditional gender stereotypes as women were expected to marry, and a wealthy husband was considered to be the most desirable prospect for a young Victorian woman - a concept furthered when Jane becomes wealthy in her own right. Finally, nearing the end of the novel Jane tells Mr. Rochester outright that marriage is of no importance to her. So, it can be concluded that Jane's relationship with Mr. Rochester subverts the gender stereotypes of the Victorian era. Despite the challenges presented to traditional gender roles in Jane Eyre, however, it must be noted that Jane is being controlled in some way by Mr. Rochester throughout the novel. Jane says that Mr. Rochester 'sends for' her when he wishes to see her, for example, suggesting that she had not the authority to seek him in turn. In the end Jane does conform to the expectations of patriarchal society by returning to Mr. Rochester, marrying him, and indeed caring for him. ...read more.

Simone de Beauvoir's concept of the man as the "One" and the woman as the "Other" relates well here, as the concept of male and female selfhood is such that a woman "'... cannot think of herself without a man.'" (de Beauvoir, n.d., p.xvi) So, the pattern of male domination and submissive female gender roles that recurs in each of these texts mirrors life as a woman in the Victorian period. It can therefore be said that Jane Eyre by Charlotte Bront� and My Last Duchess and Porphyria's Lover by Robert Browning are works which subvert gender stereotypes to some degree. Bront� presents the reader with Jane, an upfront and honest young woman who runs away from the man she loves to live independently and yet resolves to marry him at the end of the novel. Moreover, Browning writes of both a young woman so beautiful that her lover strangles her to preserve her youth and love for him, and a duchess killed by order of her husband when he suspects that she is interested in other men. This clear pattern suggests to the reader that in the Victorian period it was difficult for a woman to subvert gender stereotypes for an extended period of time, as the concept of a patriarchal society in which women were submissive and men dominant was so ingrained into the minds of those alive at the time. In all of these works, the male eventually owns and controls the female. The works therefore subvert gender stereotypes, but ultimately conform to them. ...read more.