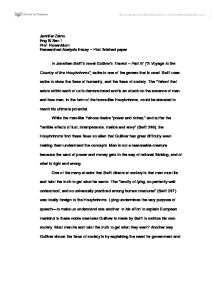 Jennifer Zaino Eng 8/ Sec 1 Prof. Rosenblum Researched Analysis Essay ~ First finished paper In Jonathan Swift's novel Gulliver's Travels - Part IV ("A Voyage to the Country of the Houyhnhnms", satire is one of the genres that is used. Swift uses satire to show the flaws of humanity, and the flaws of society. The 'Yahoo' that exists within each of us is demonstrated and is an attack on the essence of man and how man, in the form of the horse-like Houyhnhnms, could be elevated to reach his ultimate potential. While the man-like Yahoos desire "power and riches," and suffer the "terrible effects of l**t, intemperance, malice and envy" (Swift 249), the Houyhnhnms find these flaws so alien that Gulliver has great difficulty even making them understand the concepts. Man is not a reasonable creature because the want of power and money gets in the way of rational thinking, and of what is right and wrong. One of the many attacks that Swift directs at society is that man must lie and twist the truth to get what he wants. The "faculty of lying, so perfectly well understood, and so universally practiced among human creatures" (Swift 247) was totally foreign to the Houyhnhnms. ...read more.

People can learn how to come to agreements through open and honest discussion, and lead peaceful, orderly lives. Knowles points out Swift's conclusion that "reason alone is sufficient to govern a Rational Creature" (Knowles 127) having the ability to reason with one another without greed, without the want of power and money getting in the way, is a characteristic that the 'Yahoos' do not have. If they were able to gain this ability they would need only reason to govern their land, without the need of artificial means, such as laws and government. This also shows how in the Houyhnhnm Country all are equal and have a say in what goes on. The Houyhnhnms are able to use what they are given in nature as tools to help them survive instead of destroying themselves. "Nature and Reason were sufficient guides for a reasonable animal, " says Swift (Knowles 127). Although Gulliver points out that the Houyhnhnms "Wants and Passions are fewer than among us" (Knowles 127), Knowles questions just how "utopian" Houyhnhnm society really was. He compares Houyhnhnm philosophy to stoicism-the suppression of passion and the elevation of reason. But, Knowles points out, "since they don't have any emotions to resist (apart from one that they nurture-hatred of the Yahoos)," Houyhnhnm stoicism was cheaply earned (Knowles 128). ...read more.

I believe that other things also played a role. Gulliver, having seen that the Yahoos in many ways resemble himself, also plays a role as satire. It allows Gulliver to point out all the flaws of his fellow 'Yahoos' in Europe, without seeing that the flaws are really his as well. Knowles cites Steward Lacasece, who noted that "the Yahoos illustrate six or seven deadly sins-covetousness, l**t, anger, gluttony, envy, sloth-while Gulliver embodies the seventh, pride, by the end of the work" (Knowles 131). Certainly, though Knowles spends only a relatively small part of his treatise directly analyzing this section of the novel, he does an excellent job. He explores the various degrees and devices of satire employed by Swift. In some of his concluding pages Knowles focuses on some of the ironies of Houyhnhnm superiority. The Houyhnhnms have great difficulty in deciding whether or not to banish Gulliver. What is his status in their rigid social structure? They are not capable of seeing beyond their own two-dimensional country. Perhaps the most telling incident, a "symbol of Houyhnhnm limitation," is when Gulliver spots a tiny island in the distance through his small telescope, but the sorrel Houyhnhnm who has befriended him sees only a "cloud". He "had no Conception of a Country beside his own" (Knowles 140). Knowles' conclusion, of course, is that Houyhnhnm "myopia" was, in some ways, even worse than mankind's. ...read more.