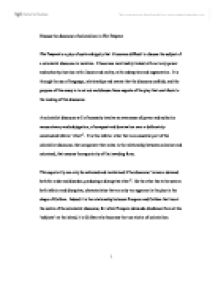 Discuss the discourse of colonialism in The Tempest.

Discuss the discourse of colonialism in The Tempest The Tempest is a play of such ambiguity that it becomes difficult to discuss the subject of a colonialist discourse in isolation. It becomes inextricably linked with not only power and authority, but also with illusion and reality, with redemption and regeneration. It is through the use of language, relationships and events that the discourse unfolds, and the purpose of this essay is to set out and discuss those aspects of the play that contribute to the making of this discourse. A colonialist discourse will of necessity involve an awareness of power and authority versus slavery and subjugation, of conquest and domination over a deliberately constructed inferior 'other'1. It is this inferior other that is an essential part of the colonialist discourse, that component that exists in the relationship between colonizer and colonized, that ensures the superiority of the invading force. This superiority can only be achieved and maintained if the discourse 'voices a demand both for order and disorder, producing a disruptive other'2. So the other has to be seen as both inferior and disruptive, characteristics that are only too apparent in the play in the shape of Caliban. Indeed it is the relationship between Prospero and Caliban that lies at the centre of the colonialist discourse, for while Prospero demands obedience from all his 'subjects' on the island, it is Caliban who becomes the true victim of colonialism. ...read more.

The language of slavery and subjugation became the language of colonialism, and the means whereby Europeans were able to emphasize the moral depravity of the indigenous people, thereby providing themselves with a suitable excuse for the colonization of the inferior other; the colonialist discourse was born. In the play Prospero asserts his superiority through a verbal discourse which reflects the dehumanized thinking of an imperialist power. The language revolves around the binary oppositions of conquest and servitude, slavery and freedom, civilized and savage, nature and nurture. This is reflected in the relationships with his 'subjects' on the island; while all are subjugated to his power, it is Caliban as the savage and deformed slave who represents the subjugated, the colonized, while Ferdinand and Ariel serve out their terms of bondage for a period of what proves to be spiritual and moral testing for redemption. Ariel claims his freedom as his right, having, in his eyes, served out his term, but Prospero reminds him that this freedom can only be achieved through further servitude, that he has already been freed from a more stringent and stultifying form of imprisonment under the auspices of Sycorax. Ferdinand sees his bondage, his 'wooden slavery' 11, as an occupation fit for a prince, only too willing to serve out his term in order to claim his rights to Miranda. ...read more.

This seeking for grace becomes just a part of the mystification of the colonialist discourse, in that it is Caliban as base, natural man who will ask for redemption. In so doing it could be argued that the necessary sense of threat that he has posed to Prospero as the disruptive other is to some extent removed; the action of seeking for grace negates that sense of threat that is needed to uphold the validity of the colonialist discourse, which is as a result undermined; new levels of meaning are thus introduced. At the same time the introduction of the word 'grace' becomes a justification of colonialism, the necessary tool in the redemptive process that, it could be argued, redeems not only those involved in the process of regeneration, but the play itself, lifting it from the purely magical and secular to the level of the divine. The word now becomes the focus around which the whole play has been enacted, throwing into confusion any preconceived ideas that we may have had concerning the issues raised. At the end of the play we witness Prospero coming to self-knowledge, embracing and taking responsibility for those darker parts of himself which he recognises in Caliban; 'This thing of darkness | I acknowledge mine'24. Nature and nurture come together briefly in acknowledgment of sins, but 'The play's 'ending' in renunciation and restoration is only the final ambivalence, being at once the apotheosis, mystification and potential erosion of the colonialist discourse'25. ...read more.