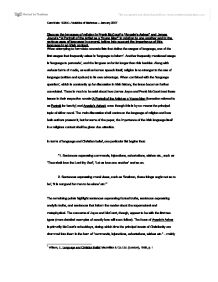 Discuss the language of religion in Frank McCourt's &quot;Angela's Ashes&quot; and James Joyce's &quot;A Portrait of the Artist as a Young Man&quot; in relation to one another and to the various uses of language in general, taking into account the importance of this language

Discuss the language of religion in Frank McCourt's "Angela's Ashes" and James Joyce's "A Portrait of the Artist as a Young Man" in relation to one another and to the various uses of language in general, taking into account the importance of this language in an Irish context. When attempting to formulate concrete lists that define the usages of language, one of the first usages that frequently arises is 'language to inform'. Another frequently mentioned usage is 'language to persuade', and the list goes on for far longer than this besides. Along with various forms of media, as well as human speech itself, religion is no stranger to the use of language (written and spoken) to its own advantage. When combined with the 'language question', which is constantly up for discussion in Irish history, the issue becomes further convoluted. There is much to be said about how James Joyce and Frank McCourt treat these issues in their respective novels (A Portrait of the Artist as a Young Man [hereafter referred to as Portrait for brevity] and Angela's Ashes), even though this is by no means the principal topic of either novel. The main discussion shall centre on the language of religion and how both authors present it, but for some of the paper, the importance of the Irish language itself in a religious context shall be given due attention. In terms of language and Christian belief, one particular list begins thus: "1. Sentences expressing commands, injunctions, exhortations, wishes etc., such as 'Thou shalt love the Lord thy God', 'Let us love one another' and so on. 2. Sentences expressing moral views, such as 'Brethren, these things ought not so to be', 'It is not good for man to be alone' etc."1 The remaining points highlight sentences expressing factual truths, sentences expressing analytic truths, and sentences that inform the reader about the supernatural and metaphysical. ...read more.

Both authors use other languages as metaphors to further illustrate this point. Towards the end of Portrait, Dedalus describes a conversation with Ghezzi, which "began in Italian and ended in pidgin English" [Joyce, 283], which in itself denotes the confusion and transience often associated with the language of religion (not to mention language in general). Both novels make great use of Latin (and in particular, memorising it ritualistically without necessarily memorising the meaning) to much the same end. This obsessive quality associated with Latin can also be found in many of Seamus Heaney's language poems, demarcating Latin as something deeply associated with Ireland and Irish language in general as well as the language of the church. One critic, though, dismisses Latin as merely "a starting point rather than a model"7 - this seems greatly erroneous in light of all of the Latinate references in both texts and the way this is made to tie in with Irish. This quotation from Angela's Ashes seems fairly representative of how both authors choose to demonstrate this line of reasoning: "We have to know them [the prayers and creeds] in Irish and English and if we forget an Irish word and use English he goes into a rage and goes at us with the stick. If he had his way we'd be learning our religion in Latin, the language of the saints who communed intimately with God and His Holy Mother, the language of the early Christians, who huddled in the catacombs and went forth to die on rack and sword, who expired in the foaming jaws of the ravenous lion. Irish is fine for patriots, English for traitors and informers, but it's the Latin that gains us entrance to heaven itself. It's the Latin the martyrs prayed in when the barbarians pulled out their nails and cut off their skin inch by inch." [McCourt, 130] The reiteration of Latin, Latin, Latin relates directly to other anecdotes in both novels: McCourt's father taking the part of priest to ...read more.

Equally, when Stephen is at the university, Latin is used as a joke-his friends translate colloquial phrases like "peace over the whole bloody globe" into Latin because they find the academic sound of the translation amusing. This jocular use of Latin mocks both the young men's education and the stern, serious manner in which Latin is used in the church. These linguistic jokes demonstrate that Stephen is no longer serious about religion. The two central texts on which this paper concentrates are positioned at a key crossroads of Irish literature. It is hardly surprising that the two authors give such diverse messages in their works regarding the language of religion itself, for the history of the use of language in the church is nothing short of convoluted. Ireland imposes a set of oppressive binaries, namely in the form of religion and nationalism, from which the authors can escape only through the ambiguity of language. Both authors portray confusion in this area, with Stephen Dedalus in Portrait ironically using rather hieratic language as he attempts to elevate himself and his life above and beyond what religion can provide. McCourt, however, is more philosophical as the language of religion becomes clearer with age, pointing out that the ambiguity of language is used in a great many other contexts, such as the euphemistic terming of death as 'going to sleep'. The two authors successfully demonstrate how language is an instrument of control as well as of communication, with linguistic forms allowing significance to be conveyed and distorted; they also successfully demonstrate how hearers can be both manipulated and informed, and (in some cases) manipulated while they suppose they are being informed.13 The many fluctuations between Irish, English and Latin in the church's history of this period leave many question marks over religious language for both authors. Ultimately, though, the language of religion is ultimately manipulated for personal or political gain - either by the church, to stop their children 'leaving the flock'; or, in the case of Joyce, by the protagonist Stephen Dedalus, in order to justify his desertion of religion altogether. ...read more.