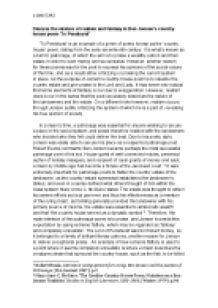 ﻿110017292 Discuss the mixture of realism and fantasy in Ben Jonson's country house poem 'To Penshurst' ?To Penshurst? is an example of a genre of poetry known as the ?country house? poem, dating from the early seventeenth century. It is what?s known as a bid for patronage, of which the aim is to praise a wealthy patron and their estate in order to earn money and social status. However, another reason for these poems was for the poet to express his opinions of the social values of the time, and as a result either criticizing or praising the current system in place. As the purpose of Jonson?s country-house poem is to idealize the country estate and give praise to the Lord and Lady, it may seem only natural that some elements of fantasy occur due to exaggeration. However, realism does occur in the sense that the poet accurately describes the nature of the landowners and the estate. On a different note however, realism occurs through Jonson subtly criticizing the system of which he is a part of, revealing his true opinion of society. In Jonson?s time, a patronage was essential for anyone wishing to secure a place in the social system, and power therefore resided with the landowners who decided who they felt could deliver the best. ...read more.

Other examples of fantasy in the poem are displayed through Jonson?s use of mythical God?s. Jonson writes ?Thy mount, to which the dryads do resort, Where Pan and Bacchus their high feasts have made, Beneath the broad beech and the chestnut shade; That taller tree, which of a nut was set At his great birth where all the Muses met?[4] ?Pan? is said to be the God of the wild and nature, and Bacchus is the God of harvest, grapes and fertility. Although suggesting these God?s preside here is a fantasy, Jonson is reinforcing the estate?s natural beauty in contrast with the grand estates where the beauty is only man-made. Alastair Fowler writes that by using the ?taller tree? Jonson is associating Sidney with the divine Ceaser. This is because it alludes to a martial epigram in which a tree planted symbolizes his lasting memory and harmonious relations to the God.[5] It is a further reach of idealization. However, Fowler also comments that country house poems view ?man?s estate as the ?effect? of he virtues?[6]. If this is the case, although idealized, Jonson is simply praising the Sidney?s on a moral basis. Although it?s clear many aspects of the poem are exaggerated in order to praise, there is evidence Jonson is being truly sincere. ...read more.

Another example of this is emphasized by ?Nor, when I take my lodging, need I pray / For fire or lights or livery: all is there?. As he is praising the security and comfort to be found at Penshurst, he is as a result subtly criticizing this is not the case at other estates. It is clear through the use of mythical God?s, the unrealistic willingness for the creatures to be killed and eaten and the idealization that fantasy occurs in the poem. However, according to Fowler ?idealism was obligatory in the panegyric mode, and was to become a general requirement of the country house poems?[11]. It seems understandable Jonson would want to flatter and exaggerate as much as possible, after all, he wanted to sustain his patronage. It is perhaps arguable that idealism is used too much in the poem, and that it doesn?t give an accurate description of the estate of Penshurst. G.A.E Parfiit writes that ?the only hints of anything non-ideal are there for contrast?[12]. The question therefore has to be raised whether the description is truly believable, or only fantasy-like. What is clear however, is the fact that through these idealizations Jonson is depicting the problems and wants to create, in verse his belief in the moral good that should be sustained in society. The aspects of Penshurst that are greatly emphasized could therefore be said to relate to a contemporary belief or problem. ...read more.