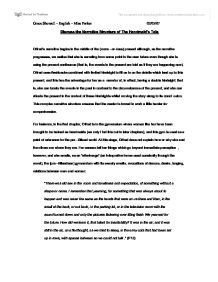 Discuss the Narrative Structure of The Handmaid's Tale

Discuss the Narrative Structure of The Handmaid's Tale Offred's narrative begins in the middle of the (more-or-less) present although, as the narrative progresses, we realise that she is narrating from some point in the near future even though she is using the present continuous (that is, the events in the present are told as if they are happening now). Offred uses flashbacks combined with limited hindsight to fill us in on the details which lead up to this present, and this has the advantage for her as a narrator of, in effect, having a double hindsight: that is, she can locate the events in the past in contrast to the circumstances of the present, and she can situate the present in the context of these hindsights whilst moving the story along to its conclusion. This complex narrative structure ensures that the reader is forced to work a little harder for comprehension. For instance, in the first chapter, Offred is in the gymnasium where women like her have been brought to be trained as handmaids (we only find this out in later chapters), and this gym is used as a point of reference for the pre-Gilead world. ...read more.

(P13) The past and the present here are divided by no more than a semi-colon. The yearning for the future which characterises youth is combined with both an anxiety about what shape it will take and a sense that as they move towards it, particularly in the realisation of their sexuality, reality never quite meets expectation. The eagerness to embrace the future is combined with a fear of its realisation, an effect that is cleverly transferred to the present at the semi-colon when the gym ceases to be a place of past yearning and becomes a venue of some sort of very regimented present. At this stage of the story, however, the narrator could quite easily be talking about a summer camp in her senior year-by which stage she would have had enough experience both to have felt the yearnings and to have experienced some of their realisations. This atmosphere changes when the lights go out, and Aunt Sara and Aunt Elizabeth start to patrol with "electric cattle prods" (P14). ...read more.

Offred characterises the conflation of the past and the present as something of a "palimpsest of unheard sound" (a palimpsest is writing material or printing blocks on which the original writing has been effaced to make way for a second writing, or a document turned and written on the reverse side). This image is a powerful one: it suggests, on the one hand, that when we read, as she "reads" the past, we know that the words and images have been "written" with some "meaning" attached; on the other, it suggests that the meanings produced in the act of reading are a function of the present. In other words, the image of the palimpsest suggests that this is exactly what the narrator will be doing in constructing her narrative-producing a reading of both events in the present and (her memory of) the past, memories which remain only as traces over which she writes her own meaning/story. The palimpsest suggests the doubly fictional nature of the tale-the narrative stance she adopts, as mediator of her own experiences is nothing more than a convenient fiction. Grace Showell - English - Miss Parker 02/05/07 ...read more.