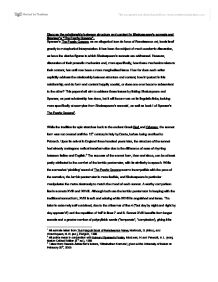 Discuss the relationship between structure and content in Shakespeare's sonnets and Spenser's &quot;The Faerie Queene&quot;.

Discuss the relationship between structure and content in Shakespeare's sonnets and Spenser's "The Faerie Queene". Spenser's The Faerie Queene, as an allegorical tour de force of Renaissance art, lends itself greatly to metaphorical interpretation. It has been the subject of much academic discussion, as have the elusive figures to which Shakespeare's sonnets are addressed. However, discussion of their prosodic mechanics and, more specifically, how these mechanics relate to their content, has until now been a more marginalised issue. How far does each writer explicitly address the relationship between structure and content; how important is this relationship; and do form and content happily coexist, or does one ever become subservient to the other? This paper shall aim to address these issues by linking Shakespeare and Spenser, as past scholarship has done, but it will focus more on its linguistic links, looking more specifically at examples from Shakespeare's sonnets1, as well as book I of Spenser's The Faerie Queene2. While the tradition for epic stretches back to the ancient Greek Iliad and Odyssey, the sonnet form was not created until the 13th century in Italy by Dante, before being ascribed to Petrarch. Upon its arrival in England three hundred years later, the structure of the sonnet had already undergone radical transformation due to the difference of ease of rhyming between Italian and English.3 The success of the sonnet form, then and since, can be at least partly attributed to the comfort of the iambic pentameter, with its similarity to speech. While the somewhat 'plodding' sound of The Faerie Queene seems incompatible with the pace of the narrative, the iambic pentameter is more flexible, and Shakespeare in particular manipulates the metre dextrously to match the mood of each sonnet. A worthy comparison lies in sonnets XVIII and XXVIII. Although both use the iambic pentameter in keeping with the traditional sonnet form, XVIII is soft and adoring while XXVIII is anguished and tense. ...read more.

from the point of view of the sonnets, that Shakespeare does not acknowledge his reasons for the use of the sonnet specifically but rather the properties of verse in general that provide immortality. However, he was surely familiar with Aristotle's division of poetic form, which Hardison condenses into a tidy definition: ""Aristotle knows that dactylic hexameter is proper for heroic verse, iambic metre for abusive satire, and trochaic metre for poetry associated with dance. He also knows that comedy adopted iambic verse at an early stage in its development because iambic verse is close to speech"12. Critics acknowledge also that the content of Spenser's The Faerie Queene is let down by its alexandrine stanzas; Hardison avers that the epic, due to its stanzaic structure, "lacks force. It is too elegant. Consequently it has difficulty achieving sustained elevation of the sort illustrated by...Chapman's Iliad and Milton's Paradise Lost...Because the stanza has a lyric quality, it can achieve moments of great emotional intensity, as in Redcross Knight's vision of the heavenly Jerusalem (I.x.53-68)...The stanza is also an effective vehicle for ornamental description (I.i.25 - the monster Error; I.iv.16-37 - the pageant of the seven deadly sins)"13. Despite The Faerie Queene's structural downfalls, Hardison does make an effort to compensate. In addition, the Spenserian ababbcbcc rhyme scheme appears more weaving and more Italian than the greatly regimented Shakespearean rhyme scheme (ababcdcdefefgg). As if to exemplify this, Sonnets XII and XX are punctuated rather strictly, the former with regular commas and semi-colons, and the latter marks a trend for dividing the octet and the sestet specifically by means of finite punctuation. In sonnet XXII the final couplet also becomes separated and thus more definitive. This observation is equally transferable to the way in which Spenser has chosen to write his epic. The majority of epics, while divided into separate books (eg. The Aeneid) or cantos (Dante's Divina Commedia), do not go on further to divide these sections into even smaller parts, whereas Spenser has. ...read more.

The two forms examined in this paper have been examined on the basis of shared qualities as much as differences. However, it is worth noting that while the sonnet is compact in itself (even though it can be part of a wider narrative basis per se), epic is by definition the exact opposite. It is imperative that this fundamental difference between the two forms is not forgotten, as it makes a significant mark on the relationship between form and content. Each of these forms has a different purpose, and each purpose is multi-layered, reflected in the subsequent differences between Shakespeare's and Spenser's works in terms of the way each writer manipulates prosody, syntax, diction, symbolism, character, register, and metaphor. Spenser does not deviate from designated structures nearly so much as Shakespeare, suggesting that Spenser has chosen one form only, and expects and hopes it to be applicable to the entire work, whereas Shakespeare does not foster such hopes. Spenser does not explicitly address the notion of the writer's craft in his work, whereas Shakespeare does (albeit referring usually to 'verse' generally, rather than the sonnet form itself); what's more, Shakespeare also dares to change form subtly, in accordance with the mood or subject of each individual sonnet, and this in itself says a great deal about how Shakespeare viewed the relationship between form and content. Regardless of whether or not each writer addresses this explicitly in his work, the relationship between structure and content is carefully considered by each, and is far from unfounded. Word count: 3118 Works consulted * Berger H (Jr) (ed.), Spenser: A Collection of Critical Essays, Prentice-Hall Inc., 1968 * Blake, NF, Rhythmical Alliteration, Modern Philology, vol 67, no. 2, 1969 * Cutler, A. & Ladd, D. R. (eds), Prosody: Models and Measurements, Springer-Verlag, 1983 * Kermode, F, Shakespeare, Spenser, Donne: Renaissance Essays, Routledge & Kegan Paul, 1971 * Mack, P. (ed.), Renaissance Rhetoric, St. Martin's Press, 1994 * Palmer, F. R., Prosodic Analysis, Oxford University Press, 1970 * Schar, C. ...read more.