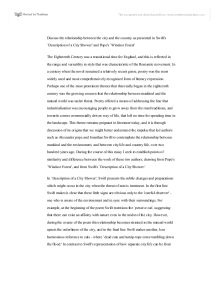 Discuss the relationship between the city and the country as presented in Swift's `Description of a City Shower' and Pope's `Windsor Forest' The Eighteenth Century was a transitional time for England, and this is reflected in the range and versatility in style that was characteristic of the Romantic movement. In a century when the novel remained a relatively recent genre, poetry was the most widely used and most comprehensively recognised form of literary expression. Perhaps one of the most prominent themes that that really began in the eighteenth century was the growing concern that the relationship between mankind and the natural world was under threat. Poetry offered a means of addressing the fear that industrialisation was encouraging people to grow away from the rural traditions, and towards a more commercially driven way of life, that left no time for spending time in the landscape. This theme remains poignant in literature today, and it is through discussion of its origins that we might better understand the impulse that led authors such as Alexander pope and Jonathan Swift to contemplate the relationship between mankind and the environment, and between city life and country life, over two hundred years ago. During the course of this essay I seek to establish points of similarity and difference between the work of these two authors, drawing from Pope's `Windsor Forest', and from Swift's `Description of a City Shower.' ...read more.

Let India boast her plants, nor envy we The weeping amber or the balmy tree, (Lines 25-30, p21) In Swift's city, a typical day can suddenly be brought to a halt by a change in the weather, whereas in Pope's countryside there exists a form of continuity between the character of the countryside and the activities of human life within it. However, Pope makes it clear that this phenomenon is only something that has occurred since mankind became civilised: Not thus the land appeared in ages past, A dreary desert and a gloomy waste, To savage beasts and savage laws a prey, And kings more furious and severe than they; Who claimed the skies, dispeopled air and floods, The lonely lords of empty wilds and woods: Cities laid waste, they stormed the dens and caves (Lines 43-49. p21) Before the dawn of the Enlightenment in the mid seventeenth century, the landscape was harsh and `severe', where without ordered society `cities laid waste' and lords ruled over `empty wilds and woods.' Pope's use of language points to ancient existence being chaotic and disjointed; the antithesis to the line at the beginning of the poem - `Not chaos-like together crushed and bruised.' In this respect, Pope is suggesting that it is only through man's pursuit of knowledge and spiritual realisation that a contemporary balance between man and nature can be achieved. A further example of Pope's interest in this form of balance can be seen in his verse `Ode on Solitude', where ...read more.

In conclusion, Swift's poem about city life is less experimental than Pope's portrayal of country life. Swift places more emphasis on the symbolism in his work, caring less for historical significance - where a `beau' in a box is still like a Greek trapped in a wooden horse because man's nature is essentially corrupt and unchanging. In contrast, Pope's message is a little brighter, if not only for his belief in `retreat' from society being a way to readdress the balance between man and nature. As critic Kathleen Williams reminds us, Swift's greatest gift was for his ability to present objects as they really existed in life `without heightening or enlarging them, and without adding any imaginary circumstances. In this way of writing Swift excelled.' (Williams. Cited in Wharton, 1995, p.209). This comment is reflected in Swift's novels which gave literature some of the earliest forms of realism. In contrast, Pope relied more upon imaginative devices to entertain his reader, where he recounts his version of historical events within the landscape in order to make vivid the changing relationship between man and nature. Both representations of city and country life did reflect pressing problems and concerns of eighteenth-century living. For example, the corruption so acutely symbolised by Swift, and Pope's interest in the threat of industrialisation. Perhaps what is most apparent is the contrast between city and country living, where in Swift's London disorder is - like the approaching storm - only a few minutes away, and in Pope's the landscape disorder used to be the natural order of things, before mankind fought to achieve some form of stability. ...read more.