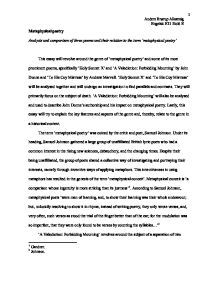 Discuss the significance of the term metaphysical poetry in relation to three of the poems you have studied this term. You should also look up the word metaphysical in the OED and use some of the information given in your ess

Metaphysical poetry Analysis and comparison of three poems and their relation to the term 'metaphysical poetry' This essay will revolve around the genre of 'metaphysical poetry' and some of its most prominent poems, specifically 'Holy Sonnet X' and 'A Valediction: Forbidding Mourning' by John Donne and 'To His Coy Mistress' by Andrew Marvell. 'Holy Sonnet X' and 'To His Coy Mistress' will be analysed together and will undergo an investigation to find parallels and contrasts. They will primarily focus on the subject of death. 'A Valediction: Forbidding Mourning' will also be analysed and used to describe John Donne's authorship and his impact on metaphysical poetry. Lastly, this essay will try to explain the key features and aspects of the genre and, thereby, relate to the genre in a historical context. The term 'metaphysical poetry' was coined by the critic and poet, Samuel Johnson. Under its heading, Samuel Johnson gathered a large group of unaffiliated British lyric poets who had a common interest in the rising new sciences, debauchery, and the changing times. Despite their being unaffiliated, the group of poets shared a collective way of investigating and portraying their interests, namely through inventive ways of applying metaphors. This inventiveness in using metaphors has resulted in the genesis of the term 'metaphysical conceit'. Metaphysical conceit is 'a comparison whose ingenuity is more striking than its justness'1. According to Samuel Johnson, metaphysical poets 'were men of learning, and, to show their learning was their whole endeavour; but, unluckily resolving to show it in rhyme, instead of writing poetry, they only wrote verses, and, very often, such verses as stood the trial of the finger better than of the ear; for the modulation was so imperfect, that they were only found to be verses by counting the syllables...'2 'A Valediction: Forbidding Mourning' revolves around the subject of a separation of two lovers. The speaker explains that, though they have to spend time apart, they should not treat their farewell as an occasion for mourning and sorrow. ...read more.

The rigid structure seems to be in alignment with the persuasion of the mistress. It is elegant and has symmetric rhyming couplets. Near the end of the poem, however, he uses seven-syllable lines, such as 'Through the iron gates of life'20. This variation adds to a sense of urgency and vigorousness - the end is getting nearer. Andrew Marvell's rigid form, with its developing sense of urgency, heightens the perception of resignation and despair. John Donne, contrary to Andrew Marvell, is more varied in his structural disposition. 'Holy Sonnet X' contains primarily iambic pentameters but also some eleven-syllable lines. In many ways, the structure of 'Holy Sonnet X' resembles that of the Petrarchan sonnet. With its ABBAABBACDDCAA-rhyme scheme it deviates slightly from the conventional Petrarchan rhyme scheme. The diversity in the rhythm enhances the perception of a free way of thinking and confidence in death's vulnerability. The volta can arguably be determined to be in two places: either at the conventional Petrarchan position - at the beginning of line 9, where John Donne starts calling death names - or in the middle of the last line, where John Donne turns aggressive on death: 'Death, thou shalt die.'21 Both Andrew Marvell and John Donne use metaphysical conceit to create a long list of images in the head of the reader. Though they both use comparisons and metaphors, the consequences of the usage are quite different across the two poems. The images handed to the reader in 'To his Coy Mistress' rapidly changes and often skirt around the disturbing and frightening subject of death. It is as if it is unbearable to dwell too long on certain aspects of death, and, therefore, a new image or metaphor is quickly handed to the reader. For instance, Andrew Marvell states that: 'The grave's a fine and private place, / But none I think do there embrace'22 and then proceeds to state: 'Now therefore, while the youthful hue / Sits on thy skin like morning dew'23. ...read more.

S. Eliot thoroughly explains how metaphysical poets' ability to work on multiple planes distinguished them from the eighteenth-century poets such as Robert Browning and Alfred Tennyson: Tennyson and Browning are poets and they think; but they do not feel their thought as immediately as the odour of a rose. A thought to Donne was an experience; it modified his sensibility. When a poet's mind is perfectly equipped for its work, it is constantly amalgamating disparate experience; the ordinary man's experience is chaotic, irregular, and fragmentary. The latter falls in love, or reads Spinoza and these two experiences have nothing to do with each other, or with the noise of the typewriter or the smell of cooking; in the mind of the poet these experiences are always forming new wholes. 39 T. S. Eliot carries on with an examination the similarities of John Donne and the modern age. Consequently, he ends up discussing the similarities of sensibility between the metaphysical poets and the modern poets. Eliot states that the use of conceit is apparent in both genres and that that both genres rely on the transmutation of ideas into sensations and feelings into states of mind. With unsubtle self-praise, T. S. Eliot attributes these characteristics to his own poetry and to that of Charles Baudelaire and Jules Laforgue. In conclusion, T. S. Eliot draws a straight line from the metaphysical poetry to the modern English poetry of the early twentieth century and, consequently, he and his peers are direct descendants of John Donne and his cohesive. The eighteenth and nineteenth centuries had merely been an unfortunate pause in the inevitable evolvement of metaphysical poetry. T. S. Eliot argues that in order to be a complete and proper poet, one must achieve a unification of sensibilities, and must express this unified sensibility in poetry. He continues, stating that though it is difficult and complex to attain these abilities, the metaphysical and the modern English poets possess this complexity, and, thus, they have completeness and maturity. ...read more.