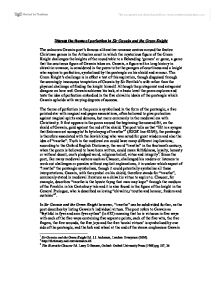 Discuss the theme of perfection in Sir Gawain and the Green Knight The unknown Gawain-poet's famous alliterative romance centres around the festive Christmas games in the Arthurian court in which the mysterious figure of the Green Knight challenges the knights of the round table to a Beheading 'gomen' or game, a game that the courteous figure of Gawain takes on. Gawain, a figure with a long history in chivalric romance, is considered in the poem to be the paragon of courtliness and a knight who aspires to perfection, symbolised by the pentangle on his shield and armour. The Green Knight's challenge is in effect a test of this aspiration, though disguised through the seemingly innocuous temptation of Gawain by Sir Bertilak's wife rather than the physical challenge of finding the knight himself. Although the protagonist and antagonist disagree on how well Gawain achieves his task, at a basic level the poem explores and tests the idea of perfection embodied in the five chivalric ideals of the pentangle which Gawain upholds with varying degrees of success. The theme of perfection in the poem is symbolised in the form of the pentangle, a five pointed star with magical and pagan associations, often believed to give protection against magical spirits and demons, but more commonly in the medieval era with Christianity. It first appears in the poem around the beginning the second fitt, on the shield of Gawain, gold against the red of the shield. ...read more.

However, Bertilak's wife, who spends time with Gawain whilst her husband is out hunting, hunts Gawain in turn, as shown by the paralleling between the three hunting scenes and the three bedroom scenes, with hunting "commonly used in literature as a metaphor for s****l pursuit"5. In the first seduction scene, the lady is playful and teasing and demands of Gawain only one kiss, which Gawain duly gives up to his host. In the second, she appeals to his pride, how his "worde and your worchip walkes ayquere" and also refers to his reputation in the medieval tradition as a courtly yet philandering knight (ln 1521) yet he only yields two kisses which he once more relinquishes to his host. Finally the lady becomes aggressive on the third day, dressing provocatively in a "mery mantyle... that was furred ful fyne" (ln 1736/7) leaving her throat and back bare. The poet makes it clear that Gawain is in "gret perile" here (ln 1768) since "joye warmed his hert" (ln 1762) and that he is in danger of succumbing to her advances. This test of his "clannes" which can be taken to mean chastity, but also sinlessness and innocence generally since it "glosses honestas, mundicia, puritas, sinceritas"6, is important in relation to Gawain's moral perfection. As J.A. Burrow points out, "if he goes on refusing the lady's love, he must offend her ("lodly refuse)... [or] break loyalty to his host". Offending the lady would be a violation of "cortysye" but commiting adultery would be a violation of "clannes" but also of the ...read more.

Gawain takes this badly, his aspiration to perfection ruined and what he views as his reputation tarnished. There is a touch of pride in his adoption of the girdle as his new symbol "in tokenyng he was tane in tech of a faute" (ln 2487), advertising his fault instead of wearing a hair shirt in penance. Even this gesture is ruined when he returns to Camelot; the laughter of the court and their adoption of the green girdle as a form of honouring Gawain's achievement adds comedy to the final stanza when contrasted with Gawain's morose seriousness. It also reminds Gawain that "he is not alone in his imperfection" which also prevents him from being "outstanding" instead "indistinguishable among them, not the notorious sinner he takes himself to be"10, his pride in his fault as comically broken as his pride in his perfection. The theme of perfection in Sir Gawain and the Green Knight, or more specifically how man can never achieve perfection, is represented in the protagonist Gawain who admirably achieves much in his quest to seek the Green Knight but ultimately fails, his fear of death and love for life defeating the idea that a good Christian knight should have no fear of death since he shall go to heaven. His failing in "trawthe" proves that "no-one, not even a knight of Arthur's court, can justly claim the pentangle as his emblem"11, since the perfection that it stands for can never be achieved by man. The humbling of the proud Gawain who resisted all temptation only to be defeated by an innate fault truly shows the Gawain-poet's "understanding of man... that gives his poem its power"12. ...read more.