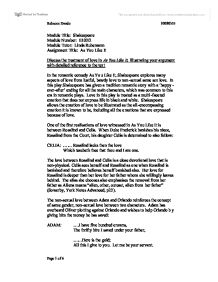 Discuss the treatment of love in As You Like It, illustrating your argument with detailed reference to the text

Module Title: Shakespeare Module Number: E103/2 Module Tutor: Linda Ruhemann Assignment Title: As You Like It Discuss the treatment of love in As You Like It, illustrating your argument with detailed reference to the text In the romantic comedy As You Like It, Shakespeare explores many aspects of love from lustful, bawdy love to non-s****l same s*x love. In this play Shakespeare has given a tradition romantic story with a 'happy-ever-after' ending for all the main characters, which was common to this era in romantic plays. Love in this play is treated as a multi-faceted emotion that does not express life in black and white. Shakespeare allows the emotion of love to be illustrated as the all-encompassing emotion it is known to be, including all the emotions that are expressed because of love. One of the first realisations of love witnessed in As You Like It is between Rosalind and Celia. When Duke Frederick banishes his niece, Rosalind from the Court, his daughter Celia is determined to also follow: CELIA: ...... Rosalind lacks then the love Which teacheth thee that thou and I am one. ...read more.

ORLANDO: That I would, were I of all kingdoms king. Within the theme of cynical love, Shakespeare also emphasises the folly of wives who are supposed to be in love with their husbands yet seek to deceive them by having affairs. During this period it was said that a husband whose wife had been having extra-marital affairs would wear horns to show he had been betrayed by his wife, and should be prepared to wear them as all women are sure to cheat. Rosalind explains that in nature, only one creature has learned the true character of women: ROSALIND: .....Besides, he brings his destiny with him. ORLANDO: What's that? ROSALIND: Why, horns; which such as you are fain to be beholding to your wives for. But he comes armed in his fortune, and prevents the slander of his wife. Unrequited love is shown through Phebe's love for Ganymede. Phebe imagines herself in love with Ganymede, although he shows no partiality toward her. Phebe is not aware of Rosalind's disguise but Rosalind does not disclose that she is a woman but mocks Phebe as she has made a fool of Silvius. ...read more.

Right until the end of the play Rosalind keeps up the pretence of being Ganymede, eventually promising to bring her to be married to Orlando the next day: ROSALIND: .... Therefore, put you in your best array, bid your friends; for if you will be married tomorrow, you shall; and to Rosalind, if you will. Rosalind kept the pretence so she could be sure of Orlando's love and once certain, she agreed to marriage. Oliver and Celia fell in love at first sight and agreed to marry almost immediately.: ROSALIND: ... For your brother and my sister no sooner met but they looked; no sooner looked but they loved; .... and in these degrees they have made a pair of stairs to marriage... In As You Like It, Shakespeare has played a traditional romantic love story culminating in the marriages of the main characters. 'The harmonious ending.....upholds the values of romantic love as they are to be found in Shakespeare ...' (Sowerby, 1999, p.64) . The aspects of love displayed in the play embrace almost every emotion one can be aware of when experiencing love. In the play, Shakespeare allows the listener to experience the highs and lows of love with the characters as well as being subjected to the variance of emotions love can invoke. ...read more.