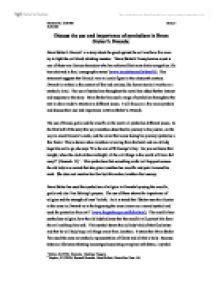 Discuss the use and importance of symbolism in Bram Stokers Dracula.

Discuss the use and importance of symbolism in Bram Stoker's Dracula. Bram Stoker's Dracula1 is a story about the good against the evil and how five men try to fight the evil blood-drinking monster. 'Bram Stoker's Transylvanian count is one of those rare literary characters who has achieved first name basis recognition. He has achieved in fact, iconographic status' (www.lsu.edu/necrofile/drac10). This statement suggests that Dracula was an iconic figure in the nineteenth century. Dracula is written in the context of fear and anxiety; like horror stories it works on a symbolic level. The use of symbolism throughout the novel has added further interest and suspense to the story. Bram Stoker has used a range of symbolism throughout the text to draw reader's attention to different issues. I will focus on a few main symbols and discuss their use and importance in Bram Stoker's Dracula. The use of blood, garlic and the crucifix in the novel all symbolise different issues. In the first half of the story the way Jonathon describes his journey in his journal, on the way to count Dracula's castle, and the event that occur during his journey symbolise a fear factor. ...read more.

The prayer that Van Helsing recites on Lucy's grave also shows religious symbolism. Another use of symbolism in Dracula is when Jonathon reaches the count's castle and is welcomed by the count. He says 'Welcome to my house! Enter freely and of your own will!' (Dracula: 26) 1. This can be a symbol to alert one that the count is a vampire or something evil as some people would believe that vampires like their victims to come to them of their own will. The use of blood in Bram Stoker's Dracula symbolises many different aspects of the story. Blood itself is a literal word but it is important to understand the issues hat it symbolises in Dracula. The colour of blood is red which in itself symbolises fear and danger. Dracula drinks blood of other humans to stay alive himself, but at the same time is taking away others lives and making them the undead. Blood here symbolises life and death, as the four men Arthur, Dr. Seward, Van Helsing and Quincy give blood to Lucy in Dracula to save her life. Lucy dies later because Dracula takes her blood and she becomes the undead. ...read more.

Another symbol for s****l desire is when Lucy becomes a vampire and calls out to Arthur that 'come to me, my arms are hungry for you'. Hughes2 describes this scene as 'Lucy seemingly demands sperm but wants blood'; her behaviour is very similar to the three vamp sisters. During the nineteenth century there was a fear about foreigners, perhaps they were seen as evil and dangerous, as after Lucy has a transfusion of blood from Quincy she dies. This symbolises that the mixing of Quincy's American blood was not good, as compared to British blood, the mixing of blood with foreigners' blood could be seen as the cause of Lucy's death. Quincy as a foreigner from another country dies in the end, which symbolises that perhaps foreigners don't belong here in Britain The importance of ones' religion and beliefs is shown in Dracula throughout the novel. In conclusion it can be said that Bram Stoker has used symbolism throughout the story, as it is one of the main features of horror stories. It is important for one to understand these symbols and the importance of the issues they portray. The symbolism of blood and religion is used wisely in Dracula and keeps the readers' attention and makes one think of the different meanings these symbols can have. ...read more.