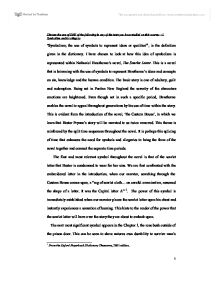 Discuss the use of ONE of the following in any of the texts you have studied on this course: - i. Symbolism and/or allegory.

Discuss the use of ONE of the following in any of the texts you have studied on this course: - i. Symbolism and/or allegory "Symbolism; the use of symbols to represent ideas or qualities"1, is the definition given in the dictionary. I have chosen to look at how this idea of symbolism is represented within Nathaniel Hawthorne's novel, The Scarlet Letter. This is a novel that is brimming with the use of symbols to represent Hawthorne's ideas and concepts on sin, knowledge and the human condition. The basic story is one of adultery, guilt and redemption. Being set in Puritan New England the severity of the characters emotions are heightened. Even though set in such a specific period, Hawthorne enables the novel to appeal throughout generations by his use of time within the story. This is evident from the introduction of the novel, 'the Custom House', in which we learn that Hester Prynne's story will be narrated to us twice removed. This theme is reinforced by the split time sequences throughout the novel. It is perhaps this splicing of time that enhances the need for symbols and allegories to bring the form of the novel together and connect the separate time periods. The first and most relevant symbol throughout the novel is that of the scarlet letter that Hester is condemned to wear for her sins. ...read more.

As Chillingworth's knowledge of Hester's link with Dimmesdale grows, so to does his increasing representation of evil. This harks back to the Bibles idea of knowledge being evil, seen in Adam and Eves eating from the tree of knowledge resulting in there expulsion from the Garden of Eden. Chillingworth's s******c enjoyment of Dimmesdale's suffering can be seen in Chapter 14, when Hester asks the physician; "Hast thou not tortured him enough...Has he not paid thee all?" Chillingworth replies with "No! -No! -He has but increased the debt!"3 Both Dimmesdale and Chillingworths's professions require them to restore people's well being, Chillingworth through science and Dimmesdale through spirituality. Like Hester represents something larger than her own existence, so to does Dimmesdale. If he were to confess his sin, it would mean sacrificing the good of the town, as in their eyes Dimmesdale symbolises all that is good and right about humanity. To the readers however, Dimmesdale represents a torturous guilt and a weakness in his inability to confess, or a 'dimness' it could be said in his incapacity to stand with Hester as a sinner. Hester and Dimmesdale's child, Pearl, is also perceived as a symbol, not only is she a physical symbol of the sin they have committed but she is also her Mothers greatest jewel. Again a biblical reference can be made towards the connotations of Pearls name. ...read more.

The town's people however see it as a symbol of an Angel, representing the ascent to heaven by Governor Winthrop, who passes away the same night. This shows how Puritans used symbols as signs for what ever meaning they wished.. To Puritans symbols, especially natural ones, were very important for explaining actions and the world around them. Within the last few chapters all of the symbolic representations seem to both come together and fall apart, to help conclude the novel. All of the undetermined matters are brought to a consequence. When Dimmesdale dies, he acts as his own judge and prosecutor, and confesses to his participation in Hester's sin. With his confession, Chillingworth looses his need for revenge and the control he holds over Hester's life. Most of the towns people find it hard to accept Dimmesdale's confession, and believe it was a continuation of his previous sermon, to show that any one can fall into the trap of sin, and to beware of this fact. Symbolism within The Scarlet Letter is used to emphasize and portray Hawthorne's views on sin, guilt and humanity that can be seen not only during the strict regimental puritan era but also throughout history. Hawthorne's use of symbolism stresses the fact that it is not always easy to differentiate between love and hate, identity and symbolism and between sin and virtue. To portray the ideas he thought most important, Hawthorne discards the style of realism for the more powerful and discrete use of symbolism within The Scarlet Letter. ...read more.