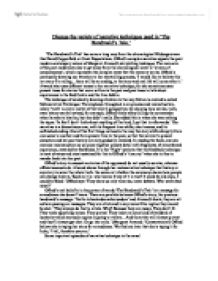 Discuss the variety of narrative techniques used in 'The Handmaid's Tale.'

Discuss the variety of narrative techniques used in 'The Handmaid's Tale.' 'The Handmaid's Tale' has come a long way from the chronological Bildungsroman like David Copperfield or Great Expectations. Offred's complex narrative signals the post modern contempory nature of Margaret Atwood's storytelling technique. The main aim of the post-modernists was to get away from the chronological novel to 'stream of consciencenss', which represents the complex ways that the memory works. Offred is continually drawing our attention to her storytelling process, 'I would like to believe this is a story I'm telling...there will be an ending, to the story and real life will come after it.' Atwood also uses different tenses in her narrative technique, for she sometimes uses present tense for stories that were written in the past and past tense to talk about experiences in the Red Centre and the time before. ...read more.

She added this in when she was making the tapes: 'In fact I don't think about anything of the kind; I put that in afterwards.' Her narrative is a discontinous one, with its frequent time shifts, short scenes, and its unfinished ending. One of the first things noticed is the way the story shifts abruptly from one scene to another and from present time to the past, so that the narrator's present sistuation and her past history are only gradually revealed. In reading the book, one can exercise reconstruction as we piece together present detail with fragments of remembered experience, revealed by flashbacks. It is the 'Night' sections that the flashback technique is most obvious and most sustained for this is Offred's 'time out' when she is free to wander back into her past. ...read more.

Who wants bad news?' Offred's real belief is in the power of words.'The Handmaid's Tale' is a message for an audience she doesn't know. There are parallels between Offred's story, the previous handmaid's message: 'Nolite te bastardes carborundum' and Atwood's book; they are all authors passing on messages. They are artists and in any monolithic regime they would be shot. 'They always do that to artists. Why? Because they are messy. They don't fit. They make squarking noises. They protest. They insist on some kind of standard of humanity which any such regime is going to violate...And the artists will always protest and they'll always get shot. Or go into exile.' (Margaret Atwood: 'Converstaions') Offred believe she is taping her story for an audience. We find out later that she is taping it for Luke, 'I tell, therefore you are.' Some important episodes of narrative technique in the novel ...read more.