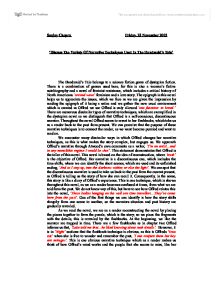 'Discuss The Variety Of Narrative Techniques Used In The Handmaid's Tale'

Sanjay Chopra Friday, 23 November 2002 'Discuss The Variety Of Narrative Techniques Used In The Handmaid's Tale' The Handmaid's Tale belongs to a science fiction genre of dystopian fiction. There is a combination of genres used here, for this is also a woman's fictive autobiography and a novel of feminist resistance, which includes a critical history of North Americans 'second wave' feminism and a love story. The epigraph in this novel helps us to appreciate the issues, which we face as we are given the impression by reading the epigraph of it being a satire and we gather the new cruel environment which is created as Offred we see Offred is only allowed 'one function: to breed.' There are numerous dissimilar types of narrative techniques, which are exemplified in the dystopian novel as we distinguish that Offred is a self-conscious, discontinuous narrator. Throughout the novel Offred seems to revert to her flashbacks, which take us as a reader back to the past from present. We can perceive that the purpose of these narrative techniques is to connect the reader, as we want become puzzled and want to read on. We encounter many dissimilar ways in which Offred changes her narrative techniques, as this is what makes the story complex, but engages us. ...read more.

It is here we gain a sense of Offred as a powerful personal presence with history as she takes us through events regarding Luke, and what her life was like and we can immediately observe how her pre-history was before she became a handmaid. This technique seems to be very effective as it takes us backwards in time. As a reader, we come to understand Offred's condition of double vision, for she continually sees and judges the present through her memories of the past. This is revealed as she says 'You'll forgive give. I'm a refugee from the past, and like other refugees, I go over the customs.... I've left or been forced to leave behind'. The narrative technique shown up at this point indicates the complex ways that her memory works, as the present moment is not shown, but brings along traces off other past events. This is illustrated in 'Night' as Offred is lying down and suddenly the implication regarding Nick is brought up from this present moment, as she 'believes that Nick is lying face down in a thicket'. Offred tells stories of the women as well as her own. Some of these are fixed in the past and some even while she tells her own. The story of her feminist mother is from the past and is recaptured on the film along with her memory. ...read more.

The historical notes inform us the Gilead society and how it was under a good deal of pressure from the falling rate of birth rates and environmental degradation. Towards the end of the notes we are left with the closing line, 'Are there any questions?'. This gives the story a deliberately open ended conclusion as the end of this novel marks the beginning of a discussion. Concluding this, I believe that there are many narrative techniques, which are contained within this novel, but the mains techniques are the flashbacks, which bring up the relevant stories in the past and fragmentary narrative, which tells us the story in pieces. This is how we find this story so complicated from the techniques used, but this engages the reader and makes us read more, as at times we become confused, but want to read on. I believe that these narrative techniques are very complicated and do not work in the beginning simply because as a reader we are not used to this, however as we progress we become use to the idea of this, and can understand the book. To me I think that this book was very successful and partly due to the narrative technique as I believe its very effective, as we are taken back and forth in time. ...read more.