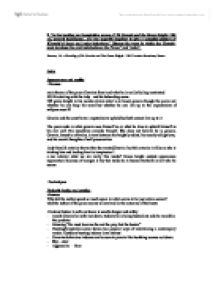 Discuss the ways in which the Gawain-poet develops the contrasts between the 'inner' and 'outer'.

8. 'In the hunting and temptation scenes of Sir Gawain and the Green Knight, Fitt III, several techniques...are run expertly together to give a complete picture of [Gawain's] inner and outer behaviour.' Discuss the ways in which the Gawain-poet develops the contrasts between the 'inner' and 'outer'. Burrow, J.A. A Reading of Sir Gawain and The Green Knight . 1965 London:Broadway House Intro Appearance and reality -Themes main theme of the poem Gawains front and what he is really feeling contrasted EG His dealing with the lady and his beheading scene 309 green knight in his words reveals what is to haunt gawain though the poem not whether he can keep his word but whether he can live up to the expectations of arthjurs court 01 Gawain and the court have a reputation to uphold but both cannot live up to it The poem asks is what gawain sees himself as or what he tries to uphold himself as his real self. ...read more.

Outdoors hunting indoors love interest - Gawains behaviour indoors can be seen to parrelel the hunbting scenes out doors. - Shy - deer - Aggressive - Boar Sly - Fox fox loses his skin gawain needed to save his The Rituals of behaviour are follwoed indoors and outdoors. However outdoors associated with the wild and uncivilised. is often -Techniques Conclusion Arthur is built up as the most courtly and modest and the best line 26 and 85 gawain has the same blood and is of the same court when he reveals himself it is assumed that he too is bound by the same chivarly codes. His acceptence of the request and his persuit to receive his return blow show the lengths that he will go to uphold his name like arthur who was willing to chop off a mans head when his courage was questioned gawain goes to the green knights lair and is prepared to lose his life to uphold his game that even he calls stupid line 343 357 he admits that the game is foolish yet to uphold his persona he is willing to lose his life. ...read more.

We only ever see the outer appearance of arthur but his reluctance to acceptept the challenge at the begginging shows his weakness and his acceptance of the challenge also shows his blind defence of his honour. The gawain poet is showing that appearance and honour is everything to these men and they will persue the most foolish of things to uphold. Gawain is used as a vehicle to develop a further psycological insight into the issues and ideas hinted at in fitt I. A Benson "Arthur and Gawain guard their fame as zealously as Roland and Alexander, but the nobility of their actions is comically undercut by the relative triviality of the virtue for which they are famed..." Chivalry provides a valuable set of ideals toward which to strive, but a person must above all remain conscious of his or her own mortality and weakness. The acceptance of the girdle shows that gawain has weakness and fear and like other humans falls for superstition out of desperation and hope for forces beyond his control. ...read more.