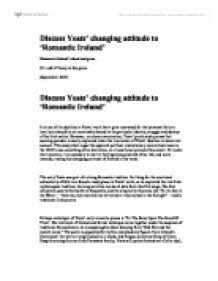 Discuss Yeats' changing attitude to 'Romantic Ireland' Romantic Ireland's dead and gone, It's with O'Leary in the grave (September 1913) Discuss Yeats' changing attitude to 'Romantic Ireland' It is one of the dualities in Yeats' work that a poet renowned for the universal forlorn love lyric should be so inextricably bound to the particular identity, struggle and destiny of the Irish nation. However, on closer examination, Yeats' poetic style proves that seeming paradox is easily explained when the true nature of Yeats' idealism is taken into account. This essay shall argue the apparent political revolutionary commitment seen in the 1910's was something of an aberration, in a transitional period of his career. To locate this transition, it is necessary to start at the beginning and end of his life, and work inwards, tracing the changing portrayal of Ireland in his verse. The early Yeats was part of a strong Romantic tradition. Its liking for the emotional authenticity of folk-lore found a ready place in Yeats' work, as he exploited the rich Irish mythological tradition: his long narrative works all date from this first stage. The first collection uses the ballad form frequently, and the simplicity of poems like 'To An Isle in the Water' - "shy one, shy one/ shy one of my heart / she moves in the firelight" - recalls traditional Irish poetry. Perhaps archetypal of Yeats' early romantic pieces is 'To The Rose Upon The Rood Of Time'. His treatment of Ireland and formal technique come together under the auspices of traditional Romanticism: he is unapologetic about drawing from "Old Eire and the ancient ways." ...read more.

imperialism too willingly, to accept the very radical, religious and political divisions imposed on places like Ireland."[2] Yeats' is not a radical revolutionary idealism, but an imaginative idealism: running along metaphysical and mythopoetic lines; not historical or political ones. If this tendency - the tendency to escape into myth - is noted, the later pieces seem less removed from his early career. Yeats peppers his verse with references to former poets, and explicitly assumes the Romantic mantle for himself: "Some moralist or mythological poet Compares the solitary soul to a swan; I am satisfied with that, Satisfied if a troubled mirror show it, Before that brief gleam of its life be gone." ('Nineteen Hundred and Nineteen') He revels in the symbol of the winding stair to mythologise the poet's ascent to meditate on the turbulence of the world below. Whereas before Ireland's enchanted past was the myth, now Ireland is yoked to greater schemes. The civil war representing the violence and disillusion of existence to be set against the spiritual purity of the poet in his tower. The events in Ireland are chained to Yeats' elaborate visions of cyclical history set out in 'The Second Coming' and 'The Gyres.' The "violence upon the roads" (Nineteen Hundred and Nineteen" and the "rage-driven, rage-tormented, and rage-hungry troop" ('Meditations in Time of Civil War') are local analogues for the universal "blood-dimmed tide" of 'The Second Coming'. Yeats still does celebrate Ireland - it would be fallacy to suggest that the violence of the Civil War sickened his idealism so much he could never face Ireland again with anything but cynicism. ...read more.

One might consider the 'out of time' reflections of the tower poems, the instant of r**e enlarged into 'Leda and the Swan', the a-temporal juxtaposition of historical figures in 'The Statues', and of course the apocalyptic visions of 'The Second Coming' and 'The Gyres.' Note, too, the vast amount of material Yeats wrote on the experiences of aging and death. It is this obsession with time that reveals Yeats' true image of Ireland. Ireland, for him at least, had to be romantic Ireland, otherwise it something to be rejected as inferior - philistine, crude, brutal - and inimical to the soul of an imaginative artist. The Ireland of Yeats' verse was always an Ireland of the past, an Ireland passing away, with one eye on the eternities of legend and history. The images of Ireland changed repeatedly yet the undertow of myth remained the same. For a brief period around 'Easter 1916' - a time that fortuitously coincided with and perhaps enabled Yeats' technical transition - the reality of present Ireland was seemingly equal to its mythic past. It is ironic that Yeats' most relevant and political poem was also his greatest act of myth-making. What was really "changed, changed utterly" was not the history of Ireland, but Yeats' imaginative landscape. Ireland, once again, faded to romantic legend, and was dead and gone. Yeats slotted Pearse as heir to Cuchulain in his mythic schema, and continued his intrinsically timeless and subjective quest, fusing Modernism, Romanticism - and Ireland - into his own poetic idiom. [1] 'Her Vision in the Wood' [2] Edward Said, Yeats and Decolonization (1988) collected in Literature in the Modern World, ed.Dennis Walder (1990) p.38 [3] Harold Bloom, Yeats (1970) ...read more.