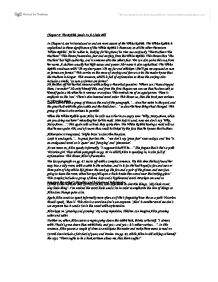 Discussions on Aice in wonderland - Chapter 4: The Rabbit Sends In A Little Bill.

Chapter 4: The Rabbit Sends In A Little Bill In Chapter 4, we're introduced to and are more aware of the White Rabbit. The White Rabbit is capitalized to show significance of the White Rabbit's character, as all the other characters. 'White Rabbit'. As he rushes in, looking for his gloves, he cries out anxiously "The Duchess! The Duchess!" This shows frustration, fear and anxiety from the White Rabbit. This shows that 'The Duchess' has high authority, and is someone who the others fear. We can also point this out from her name. A duchess usually has high status and power. Her name is also capitalized. The White Rabbit continues with "Oh my dear paws! Oh my fur and whiskers! She'll get me executed as sure as ferrets are ferrets!" This carries on the sense of anxiety and fear as to let the reader know that the Duchess is danger. This sentence, which is full of exclamation to show the anxiety also includes a simile, "as sure as ferrets are ferrets". ...read more.

This shows Alice's frustration. The last paragraph on pg. 41 starts off with a complex sentence, 'By this time she had found her way into a tidy room, with a table in the window, and in it (as she had hoped) a fan and two or three pairs of tiny white kid gloves: she took up the fan and a pair of the gloves, and was just going to leave the room, when her eye fell upon a little bottle that stood near the looking-glass.' This complex includes a group of three, lexis and a hyphenated word. Brackets are used to integrate the writer's thoughts and background information, Carroll as the narrator and Carroll as Alice, uses adjectives to describe things, 'tidy little room', tiny little thing'. I've noticed the word little used a lot in order to emphasise the size of things as Alice does change quite a lot. Again Alice tends to speak informally more often as if she's forgetting how she as a posh Victorian should speak, 'shan't'. This also is a word we don't use anymore. ...read more.

On pg. 46, when Alice is caught in the house, there's a commotion. Carroll shows this by having a 'good many voices' all talking together. 'Where's the other ladder? - Why, I hadn't to bring but one; Bills got the other - Bill! Fetch it here, lad! - Here, put 'em up at the corner - No, tie 'em together first - they don't reach half high enough yet - Oh! They'll do well enough; don't be particular - Here, Bill! Catch hold of this rope - Will the roof bear? - Mind that loose slate - Oh, its coming down!' (a loud crash) - 'Now, who did that? - It was Bill, I fancy - Who's to go down the chimney? - Nay, I shan't! You do it! - That I wont, then! - Bill's to go down - Here, Bill! The master says you're to go down the chimney!'' This long conversation confuses the reader and entertains them also. 02 They characters Alice and the White Rabbit talk to themselves a lot Alice seems to lose her value of politeness, as she spends more time in Wonderland. ...read more.