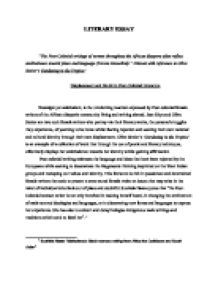 Displacement and Doubt in Post-Colonial Literature. Olive Seniors Gardening in the Tropics is an example of a collection of work that through the use of poetic and literary techniques, effectively displays her ambivalence towards h

LITERARY ESSAY "The Post-Colonial writings of women throughout the African diaspora often reflect ambivalence toward place and language (Teresa Zacoolink)." Discuss with reference to Olive Senior's Gardening in the Tropics.' Displacement and Doubt in Post-Colonial Literature Nostalgic yet ambivalent, is the unrelenting reaction expressed by Post-colonial female writers of the African diasporic community living and writing abroad. Jean Rhys and Olive Senior are two such female writers who portray via their literary works, the personal struggles they experience, of yearning to be home whilst fearing rejection and seeking their own national and cultural identity through their own displacement. Olive Senior's 'Gardening in the Tropics' is an example of a collection of work that through the use of poetic and literary techniques, effectively displays her ambivalence towards her identity whilst gaining affirmation. Post-colonial writing embraces the language and ideas that have been rejected by the Europeans while seeking to disseminate the Hegemonic thinking imprinted on the West Indian groups and reshaping our values and identity. This literature is rich in passionate and determined female writers that seek to present a once muted female voice on issues that may arise in the mind of individual who feels out of place and doubtful. ...read more.

a Caribbean person and identity and the way I define that is somebody who, precisely like me, embodies not different races, and different cultures. I mean people just have to take me or leave me." Olive Senior is attributed for her technique of tonial and linguistic variation and her ease of switch. As she has often expressed, her switch is effortless due to this being her natural style influenced by her dynamic cultural background. "Though I not quarrelsome I have to say: look I tired now" The lines above from the poem, 'Meditation on Yellow' exhibits one of Senior's dialect changes. Whilst ambivalent to her identity, it can be said that Senior manipulated her creole language to have a wider range of people who themselves are as 'indecisive' and culturally dynamic and as well, mark her identity. The manipulation of characters in a literary piece can reflect the writer's views as well as their innermost struggles and conflicts. In 'Hurricane Story 1903' it is noted that Granny is instilled and rooted with her Jamaican culture. Likewise, this relates to Senior herself who tries to hold onto her Caribbean roots whilst remaining in Canada, despite her uncertainty of belonging. ...read more.

It can be argued that the nostalgic reminiscence is presented in 'Meditation on Yellow' where Senior writes "I want to feel mellow, in that three o'clock yellow' where she muses on the sun's glow at that time of the afternoon in such a tropical setting. This greatly contrasts to her environment now in Canada which varies drastically. It can be argued that Senior, though feeling displaced in her homeland and society on a whole, still admires and yearns for her country as this is seen in the gardening motif throughout Gardening in the Tropics. Bruce King in his introduction of the book, West Indian Literature, states that "West Indian Literature is more about coming to terms with exile, rapid change and the desire to belong in a region of the world..." Many female West Indian writers of the African diaspora are subject to this exact sentiment and thus release their frustration and uncertainty through their work. Olive Senior and others effectively utilize their creative literary techniques to often display their feelings of displacement and ambivalence throughout their work. This is in fact often done, not as means of 'wanting to' but instead fulfilling a 'need to' provide a voice to others who may feel such ambivalence, likewise as Jean Rhys connected to Olive Senior. ...read more.