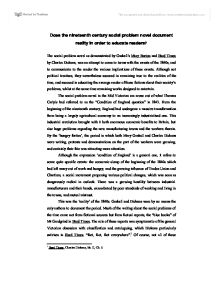 Does the nineteenth century social problem novel document reality in order to educate readers? The social problem novel as demonstrated by Gaskell's Mary Barton and Hard Times by Charles Dickens, was an attempt to come to terms with the events of the 1840s, and to communicate to the reader the various implications of these events. Although not political treatises, they nevertheless succeed in remaining true to the realities of the time, and succeed in educating the average reader of these fictions about their society's problems, whilst at the same time remaining works designed to entertain. The social problem novel in the Mid Victorian era arose out of what Thomas Carlyle had referred to as the "Condition of England question" in 1843. From the beginning of the nineteenth century, England had undergone a massive transformation from being a largely agricultural economy to an increasingly industrialised one. This industrial revolution brought with it both enormous economic benefits to Britain, but also huge problems regarding the new manufacturing towns and the workers therein. By the 'hungry forties', the period in which both Mary Gaskell and Charles Dickens were writing, protests and demonstrations on the part of the workers were growing, and certainly their fate was attracting more attention. ...read more.

When, later in the novel, the Bartons are forced to sell everything, even the 'bright green japanned tea-tray', the reader cannot help but feel empathy and compassion with their plight, we who have witnessed the tea-making ceremonies that bring so much conviviality to the family. Gaskell is neither adverse to showing her readers the worse effects of slum dwellings, and glosses little of the realities either of Manchester slums, or the contrasting luxuries of the mill-owners. "As they passed, women from their doors tossed household slops of every description into the gutter; they ran into the pool which overflowed and stagnated ... the smell was so foetid as to almost knock the two men down".7 The following scene, in which the Davenport's cellar is contrasted with the opulence of the mill-owner Carson's home; "a kitchen hung round with glittering tins, where a roaring fire burnt merrily, and where numbers of utensils hung round ... the cook broiled steaks, and the kitchen maid toasted bread, and boiled eggs"8 Gaskell establishes the context in which a desperate working man might turn to Chartism, and even to murdering a factory-owner. Although, in the preface to Mary Barton, Gaskell issues a disclaimer that she knows "nothing of Political Economy or the theories of trade"9, it appears that she had read current articles on the topic. ...read more.

The reality these novels present is not all-encompassing and is as much a selective choice as any author whether of fiction or fact is inevitably faced with. If we consider the type of information contemporary readers of Gaskell and Dickens would have had access to, the new ideas presented in these works would have been considerable. Inevitably, the education provided by the social problem novel is as much a sentimental one as a politically or socially motivated one. It must be remembered, though, that a novel is also intended to entertain. This should not be seen as mutually exclusive from educating the reader. 1 Hard Times, Charles Dickens, bk. II, Ch. ii 2 Chadwick, E - Report from the Poor Law commissioners on an inquiry in to the sanitary conditions on the labouring classes of Great Britain, London 1842, http://65.107.211.206/victorian/history/chadwick2.html 3 Engels, F - The Condition of the Working Class in England in 1844, http://www.fordham.edu/halsall/mod/1844engels.html 4 Elizabeth Gaskell, Mary Barton, p.xxxvi 5 Mary Barton, p.12 6 Mary Barton, p.13 7 Mary Barton, p.66 8 Mary Barton, p.75 9 Mary Barton, p.xxxvi 10 Wheeler, English Fiction of the Victorian Period, p.81 11 Charles Dickens, Hard Times, Introduction, p.19 12 Mary Barton, p.211 13 Mary Barton, Introduction, p.xii 14 Hard Times, bkii, chii 15 Hard Times, ch.xv ...read more.