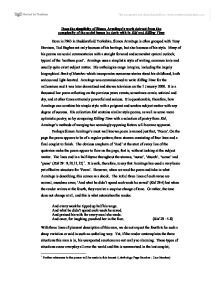 Does the simplicity of Simon Armitage's work detract from the complexity of the social issues he deals with in Kid and Killing Time Born in 1963 in Huddersfield Yorkshire, Simon Armitage is often grouped with Tony Harrison, Ted Hughes not only because of his heritage, but also because of his style. Many of his poems are social commentaries with a straight forward and somewhat cynical outlook, typical of the 'northern poet'. Armitage uses a simplistic style of writing, common lexis and usually quite overt subject matter. His anthologies range in topics, including the largely biographical Book of Matches which incorporates numerous stories about his childhood, both serious and light-hearted. Armitage was commissioned to write Killing Time for the millennium and it was later dramatised and shown television on the 1 January 2000. It is a thousand line poem reflecting on the previous years events; sometimes comic, satirical and dry, and at other times extremely powerful and serious. It is questionable, therefore, how Armitage can combine his simple style with a poignant and sombre subject matter with any degree of success. His collection Kid contains similar style poems, as well as some more optimistic poetry, so by comparing Killing Time with a selection of poetry from Kid, Armitage's methods of merging two seemingly opposing factors will become apparent. ...read more.

Robinson only appears in one of the four, and only then very briefly. Kees' poems are thought to have been somewhat prophetic of his own end. Armitage continues these poems about Robinson, the disheartened, disillusioned man, in his anthology Kid. 'Robinson's Resignation' (Kid 84) is another poem which looks at the repetitiveness of a regular nine-to-five routine life. Robinson claims he is 'done with this thing called work' (Kid 84:1) and that this is his 'final word. Nothing will follow' (Kid 84:22). The stanzas are made of lines of seven, an unusual number, difficult to work rhyme around and not balanced on the page. Armitage finishes on a single line, again an unusual structure, but in this case the simple ending is most effective. Robinson lays down his 'paper-clips and staples' (Kid 84:2) and finally chooses to make a stand against 'the business of work' (Kid 84:8). The concluding decisive line helps to reiterate this sentiment. Though this poem is atypical of Armitage's style, his message is still conveyed as efficiently. Killing Time also has an unusual structure. It chops and changes from quatrains to more open style verse and back again frequently throughout it's thousand lines. ...read more.

No doubt some of the stories will long have been forgotten, and to be reminded of an entire year of saddening news in the space of a mere fifty-two pages is perhaps the strongest technique that Armitage employs. Killing Time was inspired by Louis MacNeice's Autumn Journal in which he stated that 'poetry, in my opinion, must be honest before anything else and I refuse to be "objective" or clear-cut at the cost of honesty'(1939 : Introduction). This is reflected clearly in Armitage's millennium poem and his other works. By describing social issues very simply, with uncomplicated language and little diversions, Armitage brings them to the forefront of the reader's mind, which will associate with the images they recall from when the news stories broke. 'His work bridges the often yawning gap between seriousness and inaccessibility' (Bond 2007)The complexity of the issues is not undermined by this, only heightened. Perhaps therefore, the most powerful technique that Simon Armitage uses is not his command of language, or his satirical style, but simply the ability to engage with the truth, display unrelenting honesty and invoke the most powerful images with the smallest allusion. The truth, therefore, is more powerful that any art form and 'the ordinary can be miraculous' (Bond 2007). ...read more.